I can’t really think of a tagline that I agree with more than the above from Mega Cat Studio’s new release, Coffee Crisis. Metal’s great, love coffee, the world…it’s okay at times. So what’s the deal with Coffee Crisis?

The story kicks off with an alien invasion where the Smurglien race has taken notice of Earth’s World Wide Web and were impressed enough to create their own internet, hidden within our own. You then… quite abruptly, take over as one of our protagonists, barista’s Nick and Ashley, to fight off alien’s that have invaded the barista you work at. You go on an adventure through multiple stages to stop the alien invasion from continuing on Earth.

The gameplay is pretty standard for beat ‘em ups. You have your basic attack and jump buttons, a spin attack that’s on cooldown, a charged attack and the ability to throw enemies. Along with basic controls, you can pick up and use various weapons throughout each level as well for more variation in combat. 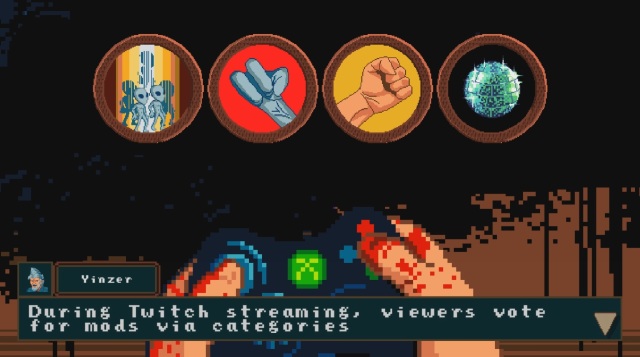 Coffee Crisis features an integrated Twitch vote system which allows your audience to vote on modifiers you receive.

There is a modifier system that is explained at the start of the game. At the end of every stage finish zone, you are randomly applied 1-5 modifiers for the next stage. They can either be good or bad for the player depending on which you receive. Some revolve around enemy spawning, enemy powerups, player powerups and various other mods that do ‘crazy things’.

The game then explains that modifiers are actually built into Twitch and Mixer. Your audience can vote for specific modifiers they want you as the streamer to receive. This isn’t something I was able to test out for this review, but I always enjoy when developers add details like this. Splasher did something similar for the speedrunning community which I mention in the March 2018 Humble Monthly Roundup.

As fun as the modifier system sounds, I didn’t really know what was going on with them throughout my playthrough. The second level takes place on a baseball field and you have to fight two Turk looking fellows. The level starts, they disappear, so I move on to the next level. I have no idea if this was intended or a modifier from the first level activating. 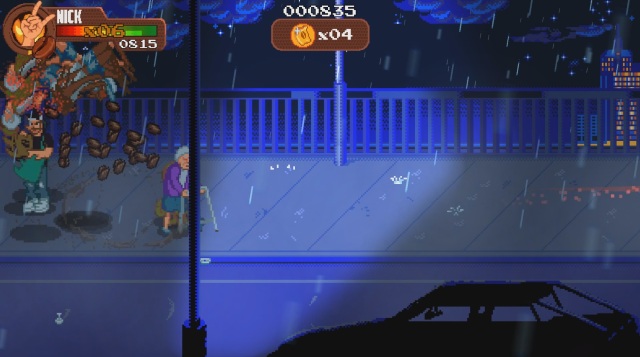 Caught a pile of enemies in a spin attack on one of the early stages.

Also, about a half hour into the game, I was on my way towards a coffee farm to protect some coffee beans. The screen started shaking, over ten enemies show up and made the stage unplayable. I stuttered around the screen trying to kill off enemies to reduce the lag but to not avail. I don’t have some piddly computer either. This is a 2d beat ‘em up game that stuttered to the point that I couldn’t continue.

I died, and returned with my stage password. The level then started and ran smoothly. I’m guessing I got a stage shaking modifier which coupled with a large enemy spawn modifier, made the stage unplayable? I’m honestly not sure what happened there. 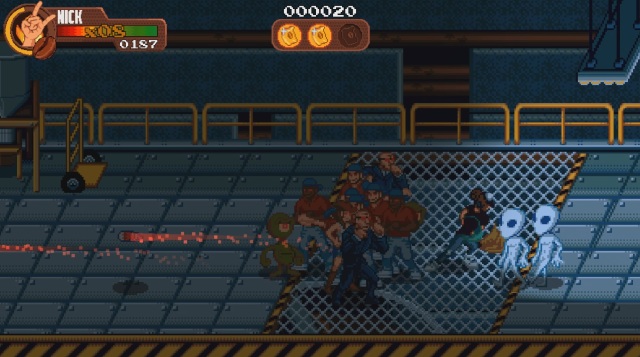 The moment where I was caught into a lagfest with a shaking screen and a large enemy spawn.

At the end of the day, after reading the tagline, I was hoping that the ideas of metal, coffee and aliens would mesh a bit better. While killing enemies to various metal songs should be fun, it seemed more out of place and separated from the narrative. Instead of having a few themes or ideas weaving together, they just felt like very stark different things placed on top of each other.

Another popular metal influenced game is 2009’s Brutal Legend. You play as roadie Eddie Riggs as you fight off demons using the power of heavy metal. In Brutal legend, demons and metal go hand in hand. Having metal in the game made sense because its narrative is weaved into the story. You use your guitar to slay demons, get powered by metal music and summon items with solos.

Instead of the story abruptly leading into aliens just walking into a barista, and metal fan barista’s fighting back aliens; it would have been nice if everything tied together. What if the alien race tapped into metal as a means to brainwash everyone, blasting it over speakers everywhere to turn them mad? It would have made sense to have metal playing over the action. Instead, we have a few random references to metal, but it just didn’t really land for me.

That being said, Coffee Crisis is fun for what it is, a 2d beat ‘em up game with aliens and metal music. The pixelated graphics are fun, it’s definitely unique and I’d be lying if I said it wasn’t fun running around and smacking old grannies with a bag of coffee beans.

Check out more at I Wasn’t Prepared For This.