Planetary Annihilation: Titans caught my eye in the new strategy Humble Bundle package. Costing only $1.00 to unlock this and two other games, it was worth the shot.

My PC gaming world began with Real-Time Strategy (RTS) games. You have a top down view of the world while commanding infantry, vehicles, ships and more to attack your enemies. Base building is always fun. You have to be strategic of where certain buildings are and what protection you provide it. You have to manage resources and be smart about what you build, and more importantly, when.

Games like Command & Conquer: Red Alert, Age of Empires, Warcraft and Starcraft took over the late 90’s and early 00’s for me when it came to gaming. Besides the Diablo series, that’s pretty much all I played on PC leading up to World of Warcraft.

Lately, I’ve felt like I haven’t been able to get into any new RTS games. The later Command & Conquer games were a far cry from their predecessors, we haven’t gotten a new RTS Warcraft game due to the success of World of Warcraft and Starcraft II, while really fun, didn’t have staying power with me.

Planetary Annihilation: Titans offers one particular mechanic that I haven’t really seen in a RTS game before. That mechanic is that you gain a 360 degree view of planets that you’re inhabiting rather than a flat map screen, making navigation and combat a little more unique. Along with this planetary view, you could be battling over multiples planets at once, increasing the depth of battle quite drastically.

Just going through the tutorial missions, things expanded at such a quick pace that I spent a lot of the time just reading unit descriptions and trying to figure out where each command was to give to my units.

The last tutorial mission shows you how ridiculous things can get. You are led towards creating orbital transports so that you can build a teleporter onto a moon orbiting your currently occupied planet. Once there, you amass resources and create what’s essentially a massive rocket on this moon. Once you activate the rocket, it propels the moon out of the orbit of your planet, and directly into a planet occupied by enemy forces, destroying both in the process. 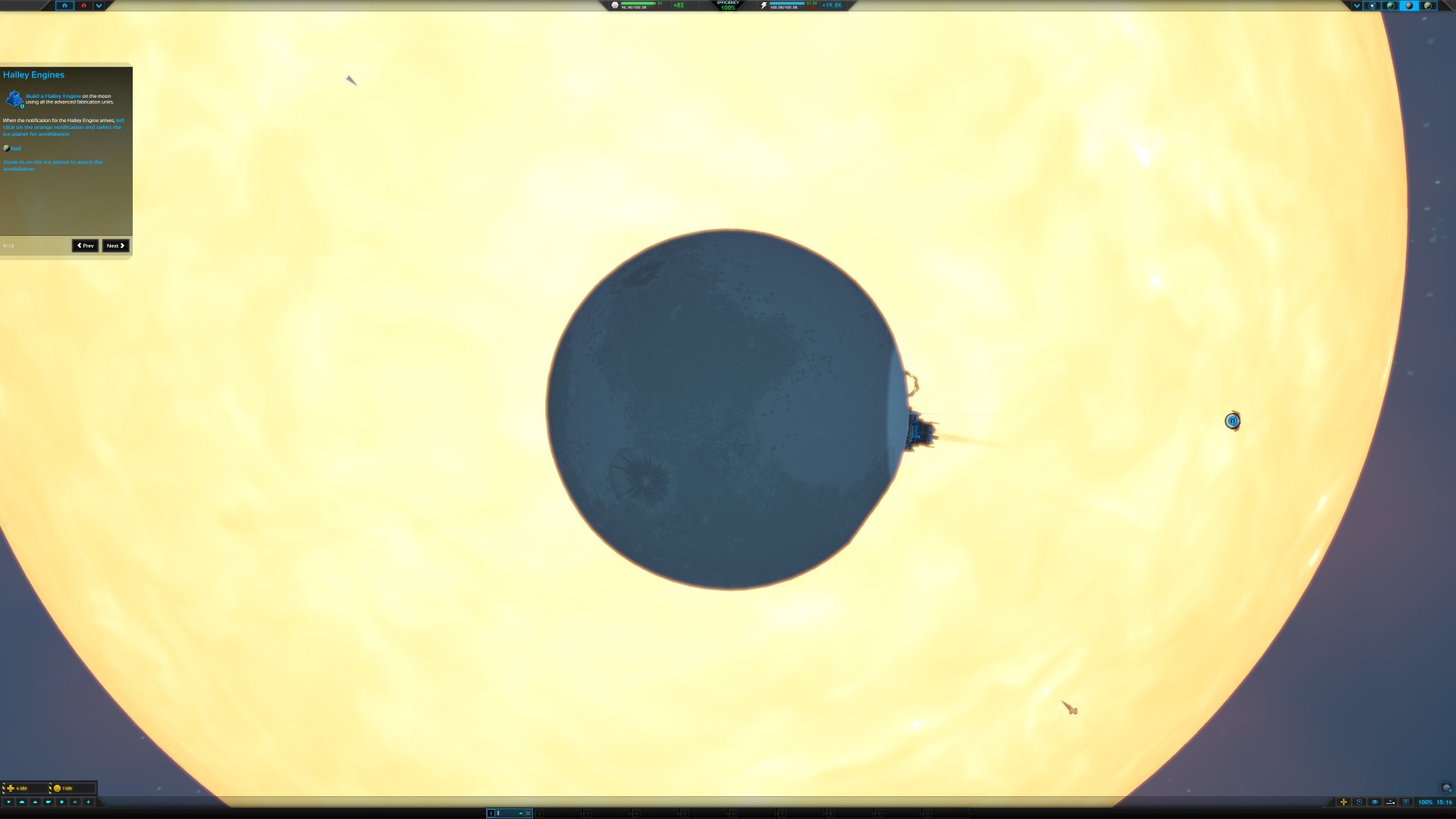 Firing the moon across the galaxy, heading towards an enemy occupied planet.

Titans also features more swarm tactics than tactical. If you’re familiar with Starcraft, the Zerg excels at creating a massive amount of weaker units to overwhelm your enemies at low resource cost, while the Protoss would require you to build less, more damaging units at a higher cost. In Titans, making as many units as possible seems to be the name of the game.

While occupying a planet, your given a Commander unit that you control and begin building your base. Each enemy player has a Commander as well; if the Commander falls, you win the mission, or lose if yours is the one to explode. These Commander units are pretty strong. While attacking the enemy Commander in one mission, they would frequently destroy 5-6 of my vehicles per shot, further enforcing swarm tactics.

I started working my way into galactic conquest, a single player mode where you travel from planet to planet in a galaxy with the goal of defeating all enemies and conquering each planet. It’s fun enough, but I was really wanting some sort of campaign to dive into.

I had a good first experience with Planetary Annihilation: Titans, but I’m not sure it’s really grabbed me yet. Right now, it seems to be another title in that pile of RTS games that can’t live up to my expectations in RTS games from the late 90’s.

To read more, check out my site here: I Wasn’t Prepared For This