Path of Diablo is one of many fan-made modifications of Diablo II that has been created over the years. While other mods such as Median XL and Eastern Sun make rather sweeping changes across the board, Path of Diablo’s focus is to increase build diversity and replayability with as little changes to the original game as possible.

Just from initial research before downloading the mod, I noticed that you can corrupt items, giving them new properties, there is a larger inventory which includes a space specifically for charm activation and skill trees have been more focused towards Path of Diablo’s mission of increasing build variety. 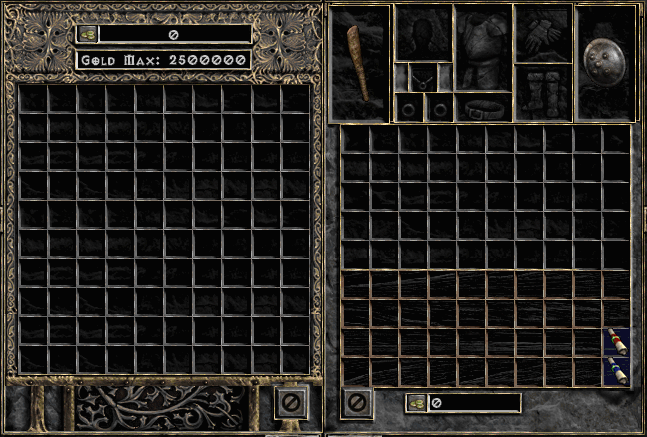 If only we had this inventory size during the original Diablo II: Lord of Destruction years.

Upon booting up your game, the first thing you’ll likely notice is the expanded inventory. Instead of the paltry 40 inventory slots from original Diablo II, you are given 90 to work with. Your stash is also greatly expanded from 48 slots to 100 for less mule action.

One interesting aspect of the Path of Diablo inventory system is the addition of the charm inventory. If you look at the inventory picture above, you’ll notice the bottom four rows have more of a slate stone finish as well as a gold border. These 40 slots are where you will be adding your charms so that you receive their bonuses.

You may think this greatly dissolves your given inventory space, but after going through Diablo II with multiple grand, large and small charms every character, it still feels like a luxury. There’s also the added bonus of not having level requirements associated with charms. As long as you throw it into the charm inventory, it’s activated. This can greatly speed up new characters as you compile charms.

The Path of Diablo UI also comes equipped with a new settings menu towards the bottom left of the screen. The settings menu offers various options to the player, but most notably included is a loot filter. Here, you can opt to include new information to dropped items. Want to know how many sockets an item has before picking it up? Always had issues discerning rune drops from regular, useless drops? Those issues and more are fixed in Path of Diablo. 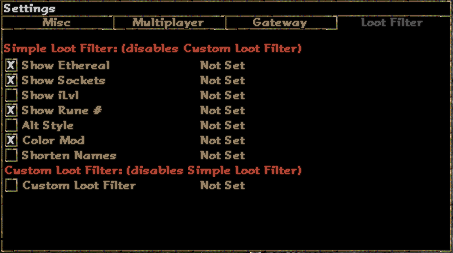 On top of customizing the loot here in the settings menu, you have the option to upload custom loot filters.

For my first playthrough, I choose to create a wind Druid. I have a personal attachment to the wind Druid going back to Diablo II: Lord of Destruction. It was my first character in the expansion and did rather terribly. Back then, I didn’t know what I was doing. Instead of focusing on maxing out a few skills, I spread my skill points around each of the three skill trees, crippling my build once I got later into Nightmare.

Despite the initial struggles, I went on to create four or five different Druids that cleared Hell difficulty. My favorite of which, was a Werewolf Druid that used a ‘ZodEth’ socketed ethereal Cruel Cryptic Axe of something or another. There were better options out there at the time, but mine was self-found and unique to me. Without top-tier gear, melee builds were tough at times to justify continuing, a problem for me that Path of Diablo works to fix, which I’ll likely get into at some point in this series.

Getting into my wind Druid for Path of Diablo, the skills you’re aiming for are later on in your skill tree. Hurricane is a level 30 skill and wouldn’t be maxed until level 50, and tornado is a tier below at level 24. To offset not having any gear at all, and the first 30-40 levels, I jumped in as a summoner.

I was surprised right off the bat at how powerful ravens now are. Instead of having a high mana cost and low damage, you’re gifted with ravens that have higher damage, added cold damage and splash damage overall that hits multiple enemies per attack. The downside here is that instead of being able to survive twelve hits before disappearing, they now only dole out three hits per raven. This becomes a real struggle for a large part of normal. 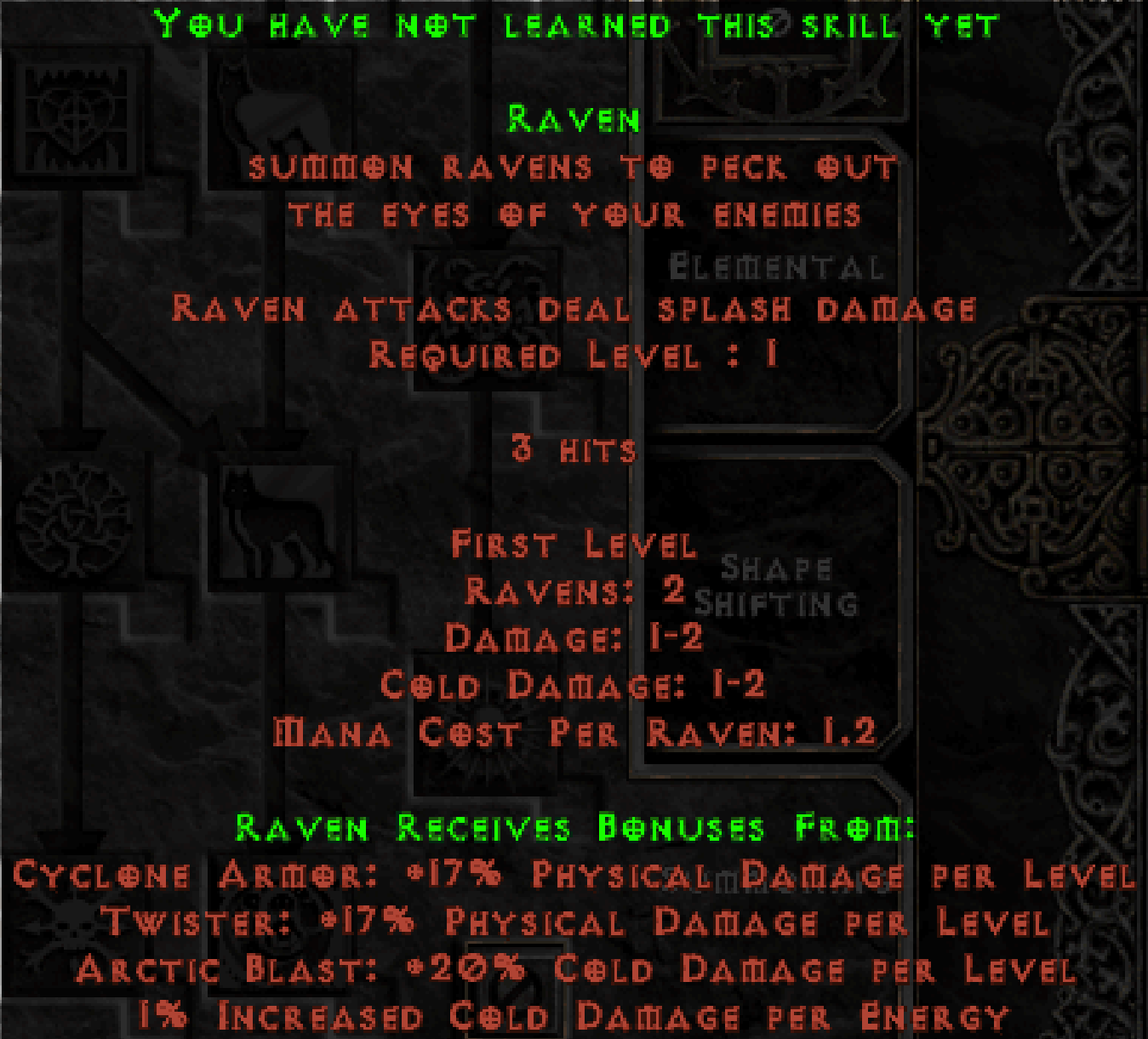 Along with increased damage, the addition of splash damage and reduced mana cost, ravens now have four different synergies to choose from.

While the mana cost is also reduced for summoning a raven in Path of Diablo, 1.2 mana vs. 6 mana at level one, I was still chugging mana potions at ridiculous rates. Three hits isn’t very many, and as you increase your raven skill level, you gain a larger flock of ravens that require constant renewal. I usually don’t focus too much on leveling energy for most builds, but if I went through this process again, I would throw some points in there to help out.

The second downside to ravens early on, is the cast time. I would wager that a good 20% of my play time through normal was me standing in place to re-cast ravens. Without having any faster cast rate to meet those vital breakpoints, it’s brutal. Adding insult to injury, I wasn’t getting lucky finding the runes required for Stealth to net me 25% FCR nor was I finding those 10% FCR rings that I usually relied on with casters. It reminded me of Diablo III’s Necromancer situation with skeletal mages and how you have to keep re-summoning them. It becomes much more enjoyable and sustainable once you get a bit better gear, but it was rough for me at the start. 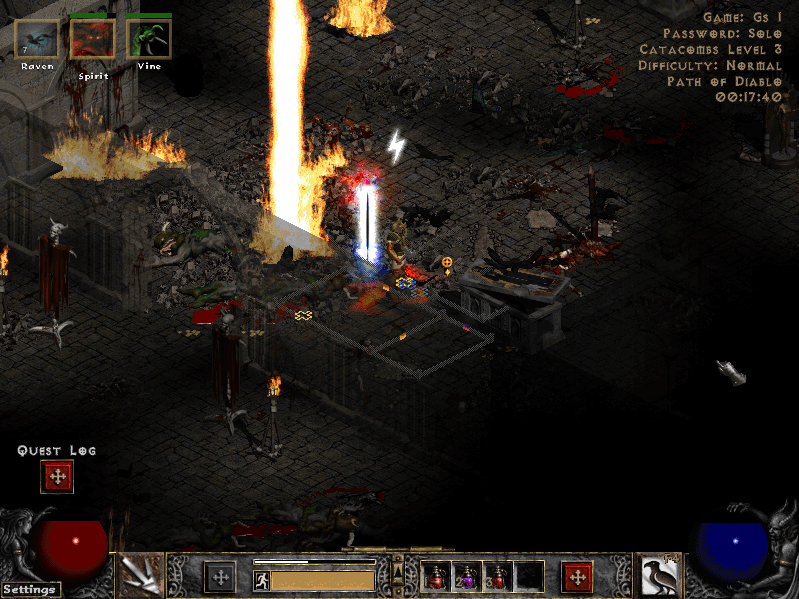 Path of Diablo was nice enough to remove a floor of the Catacombs, first Andy kill on Level 3 instead of 4.

Ravens aside, another major change from Diablo II is being able to have multiple sages and vines summoned at the same time. It does a good job of reminding you that you’re a summoner and should have an army trudging through Sanctuary alongside you. Using ravens primarily, I didn’t have many issues getting through normal difficulty. Andariel posed little challenge along with the rest of Act I. Duriel was, well, Duriel and did his usual Duriel thing and Mephisto put up little resistance as well.

I didn’t start to feel the raven pain until fighting Diablo in Chaos Sanctuary. One lightning breath took down my merc, wolves, sages and vines in one swoop which left me in a constant cycle of frantically casting ravens and chugging potions while attempting to get a sage up for more than a few seconds at a time. Due to my FCR issues, I would have to stand in harms way for long periods of time, seemingly waiting for lightning breath to hit me in the face.

Once Diablo was dispatched, I moved on to Act V. I always enjoyed Harrogath. I felt they had the best combination of characters, quests and setting in the game. I particularly remember those Bloody Foothills runs and trying to beat the players to the center of the map at Dac Farren, or struggling to get past Hell Ancients so you can move on to Baal runs. 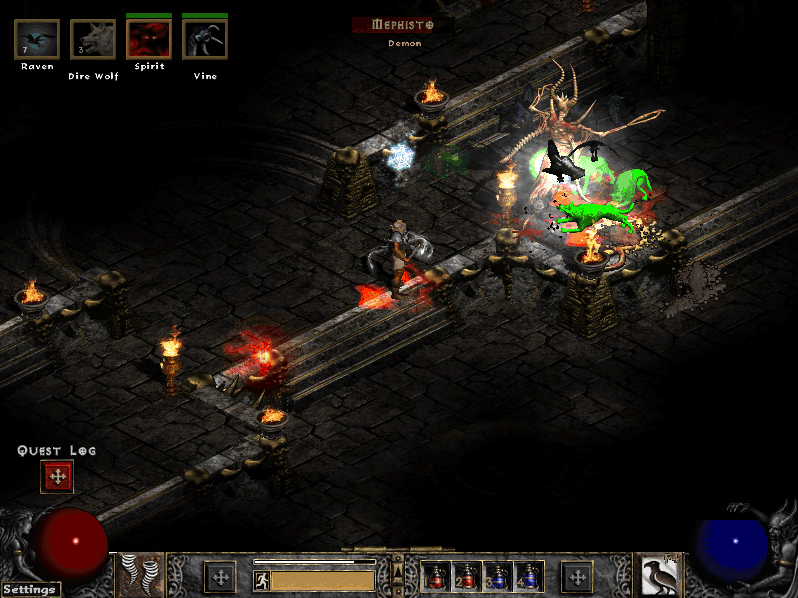 Taking down a familiar foe from my childhood.

Needless to say, the struggles from Diablo continued on throughout Act V, in particular Moon Lords and their kin made it a point to tear through my hoard of minions at will. Oddly enough, the Ancients didn’t give me much to worry about before heading into the Worldstone Chamber. I got lucky on the first few floors and didn’t roll Death Lords into the enemy pool, but hit them right before going through the gauntlet at Baal’s doorstep.

The Minions of Destruction just had too high of a health pool for me, so I pulled them out of the room and jumped in to fight Baal. He was the biggest time sink of the run, despite me never really being in danger. I found myself getting him to be on one side of a wall with me on the other, casting ravens in the distance so that they could dive bomb him a few times before disappearing. I went through an inventory screen full of mana potions before he fell.

I don’t remember finding any set or unique items of note throughout my normal run. However, I did finally create my Stealth armor before going in to fight Baal, grabbed a 10% FCR ring and found a ring that gave me +77 mana which reduced my potion chugging significantly. 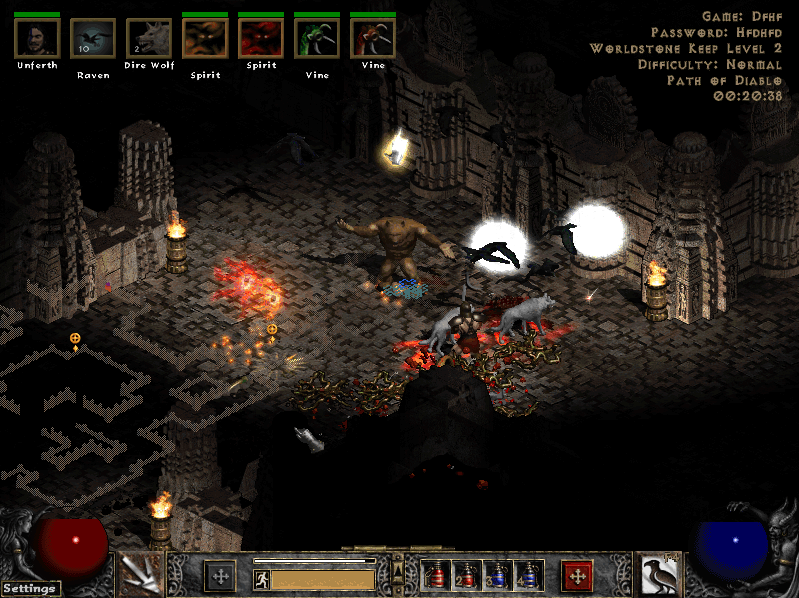 Are you not entertained? I’m just happy not to be staring down Death Lords.

So far, I’m enjoying Path of Diablo. I harbor a lot of nostalgia for Diablo II and Lord of Destruction in general, which Path of Diablo does tap into. Like their description states, they wanted to make the least amount of changes to the original game as possible, while increasing build options and replayability. With my experience thus far, they’ve succeeded. The changes they’ve made, such as having an easier time distinguishing drops with the loot filter to the inventory and stash size, don’t change what Diablo II is in my opinion. They are quality of life changes that are beneficial to the player and their experience.

I’ll be back at some point to discuss how things are going through Nightmare difficulty, as well as tap into other features of Path of Diablo that I haven’t gotten a chance to dive into yet such as corrupting items. I’m not sure when I will switch over to elemental, but we’ll get there.

If you want to check out Path of Diablo yourself, head here.

If Path of Diablo doesn’t seem like your speed, check out my first thoughts on another Diablo II mod, Median XL Sigma here.

6 thoughts on “Path of Diablo: Part I”