Welcome back to the March 2018 Monthly Bundle Roundup, the series where I go through the lesser known games of the Humble Bundle Monthly for an hour each and give my honest thoughts on the experience. Part I of this month’s games can be seen here.

Continuing on to Part II, we have Aviary Attorney, Last Day of June, Holy Potatoes! We’re in Space?! and Drawkanoid.

Aviary Attorney begins by introducing the player to attorney JayJay Falcon and Sparrowson, his trusted apprentice. You’re sent a letter by a father who wants Aviary Attorney to take on his daughter’s case where he claims she is wrongfully accused of murder.

The first thing you may notice, is the unique hand drawn art style. I greatly appreciated it while playing through my time. Every scene, character and object contains an immense amount of detail and it’s frankly just pleasant to look at.

Once you gain access to the scene of a crime or other notable locations, you go into ‘eagle eye’ mode which allows you to inspect different elements on screen to compile evidence. Searching for objects in itself is easy because you just scroll your mouse cursor around the screen and click objects that have a border. The real puzzle comes into play as you talk back and forth with Sparrowson on which items may or may not hold significance in the trial. 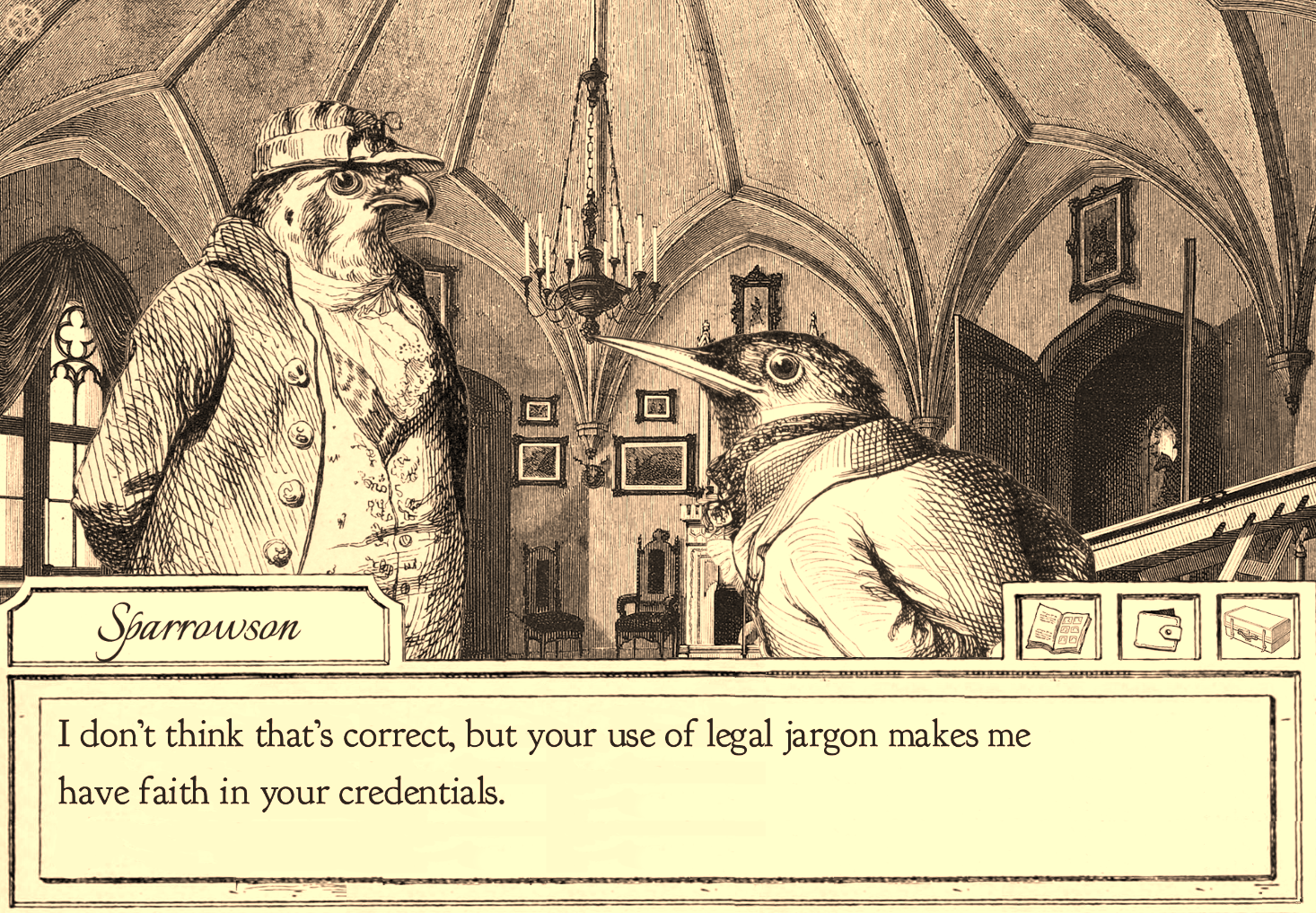 I also enjoy how choices were injected into the first case. There is one character in particular that you observe committing a crime unrelated to the case. You have the choice to bring this up later to possibly harm that character. It may be of small consequence overall, but I appreciate these types of additions to games.

I really can’t say enough about how brilliant I feel the dialogue and story is during the opening case. It’s witty, clever, fun and most importantly, feels natural to the characters in game. One example I wrote down from before the trial begins, Sparrowson is talking to Falcon and says “If something goes wrong at the trial, we can just…wing it!” I’ll take this corny humor any day.

If there is a downside to how dialogue is handled, it’s that you have to appreciate puns and ‘bad jokes’. Now, I put bad jokes into quotes because while I think the humor is hilarious, some just won’t, and that’s okay.

During the trial, you go through each of the suspects and have the ability to cross examine. This is where you find out if you were paying attention during all of the puns. You choose topics to speak on, but you have to be careful not to meander or stall with pointless questions, thus risking losing credibility with the jury. It also means that you can’t just click through every option, every time. Instead, you have to think through the evidence and form specific lines of questioning. 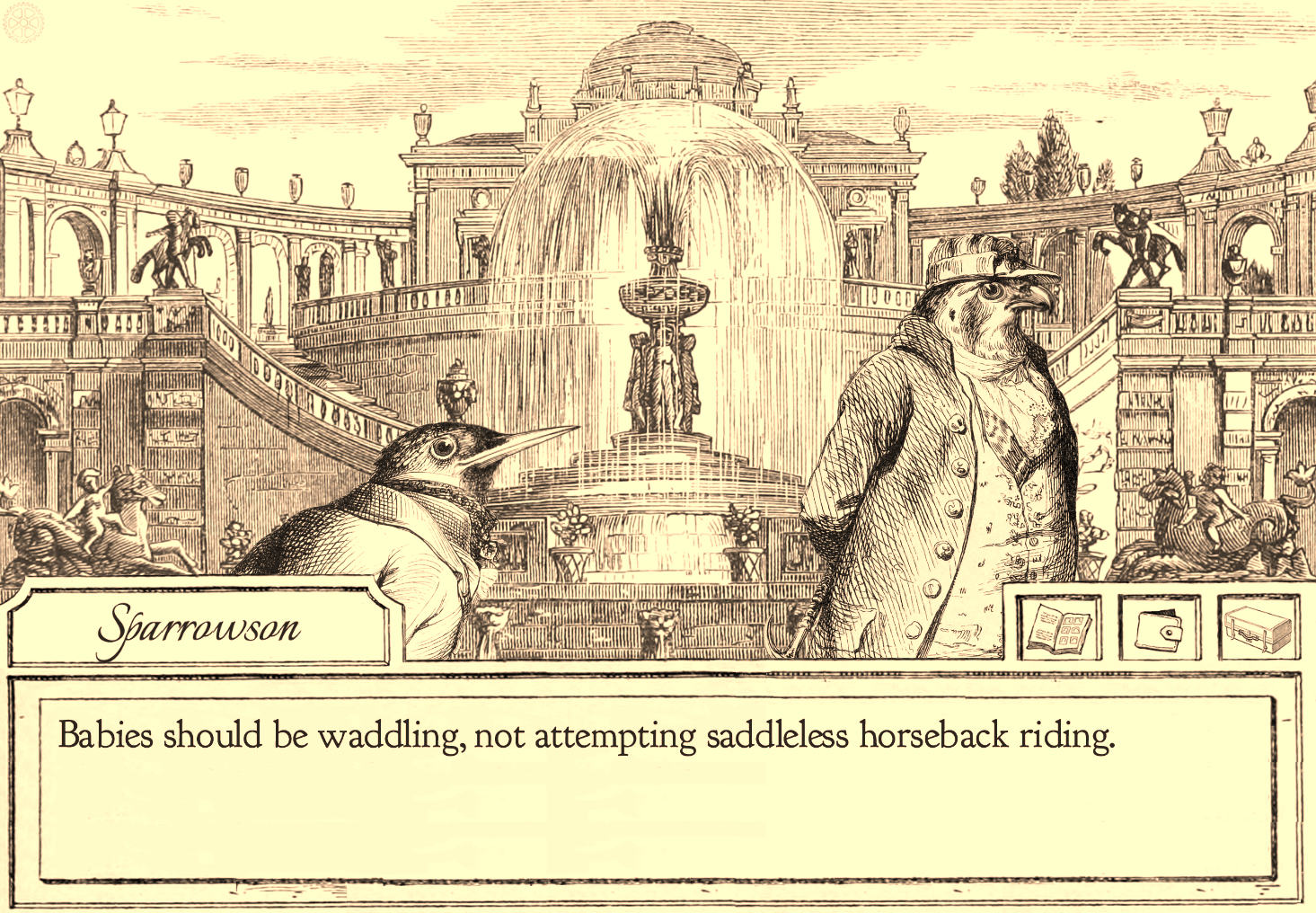 I also feel that sound design deserves a well earned mention. The music is fantastic and contains a lot of fun melodies via piano. At more relaxing moments, it can sound rather ambient and relaxing in the background. To contrast this; when you are at the end of the first trial and accusing a suspect of murder, the music ramps up into a more brash and bombastic nature.

Clever and self-aware are words that most comes to mind when looking at the details of Aviary Attorney. Details that you investigate are peppered with personality and humor. Aviary Attorney is self-aware and knows they are talking to and about humanoid lions, cats, frogs and others. It strikes a very fun balance that can catch you off guard.

I thoroughly enjoyed Aviary Attorney. By the end of the first case, I was hooked.

This one is tough. I could tell from the name of the game and preview images on Steam that this could be an emotional ride to get through.

Because of the narrative structure, I’m hesitant to spoil any real details on what goes into the Last Day of June. To describe it in a more ambiguous way, Last Day of June is largely a narrative based game that you guide various characters through. The setting is a small village and there is an event that occurs in which the game is centralized around. 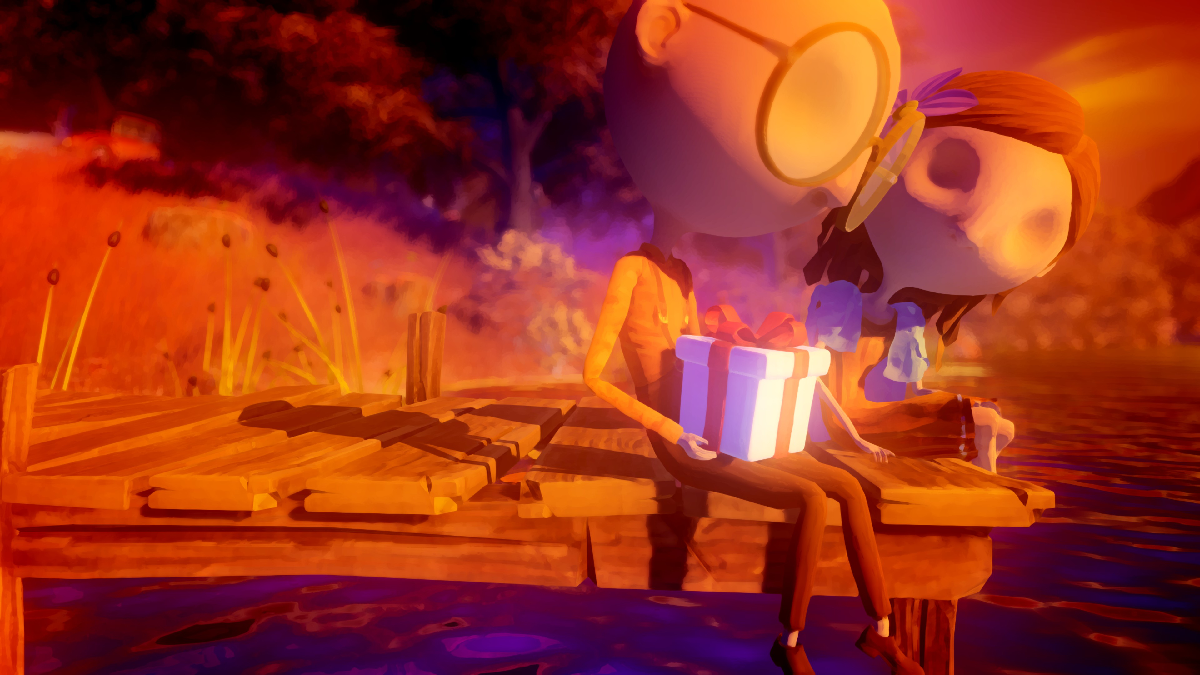 Of the few things I will note, the art style is vibrant and full of emotion, despite not being your typical graphically detailed game. The lighting and shadows definitely stick out the most. I was taken aback by seeing Steven Wilson’s name flash on screen as well as the creator of the soundtrack. Most commonly known for his work in Porcupine Tree, Steven’s impacted me the most by producing a Deliverance and Damnation by Opeth in the early 2000’s. His style can be heard here as well and is a great, melodic fit to the Last Day of June. 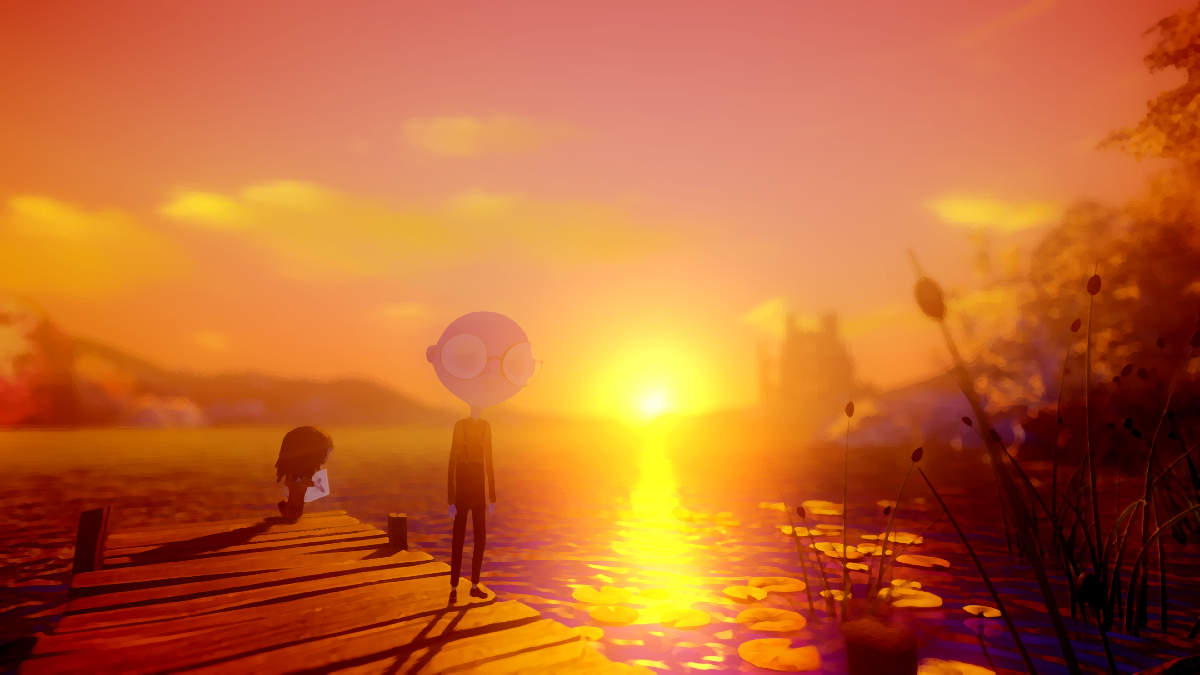 As you progress, you can start to see the narrative fill out; that if maybe one thing had occurred differently, you wouldn’t have ended up where you are. When my hour was up, I was thankful, not because the game was a bad experience but because I was afraid of the feelings that it was invoking. Of what I played, the Last Day of June was haunting, and heartbreaking.

Holy Potatoes! We’re in Space?! is a tactical, turn based strategy game that largely involves ship vs. ship combat, exploration and preparation.

You start off the game in tutorial mode, running through scenarios and mechanics so you understand where everything is. I always view these types of tutorials in particular as sort of ‘impending tutorials’. You are in charge of a powerful ship, with many weapons, doing a lot of damage. When you get out of this tutorial and jump into the story, your ship is bare bones; you have one or two weapons and do minimal damage. It gives you something to look forward to as you progress. 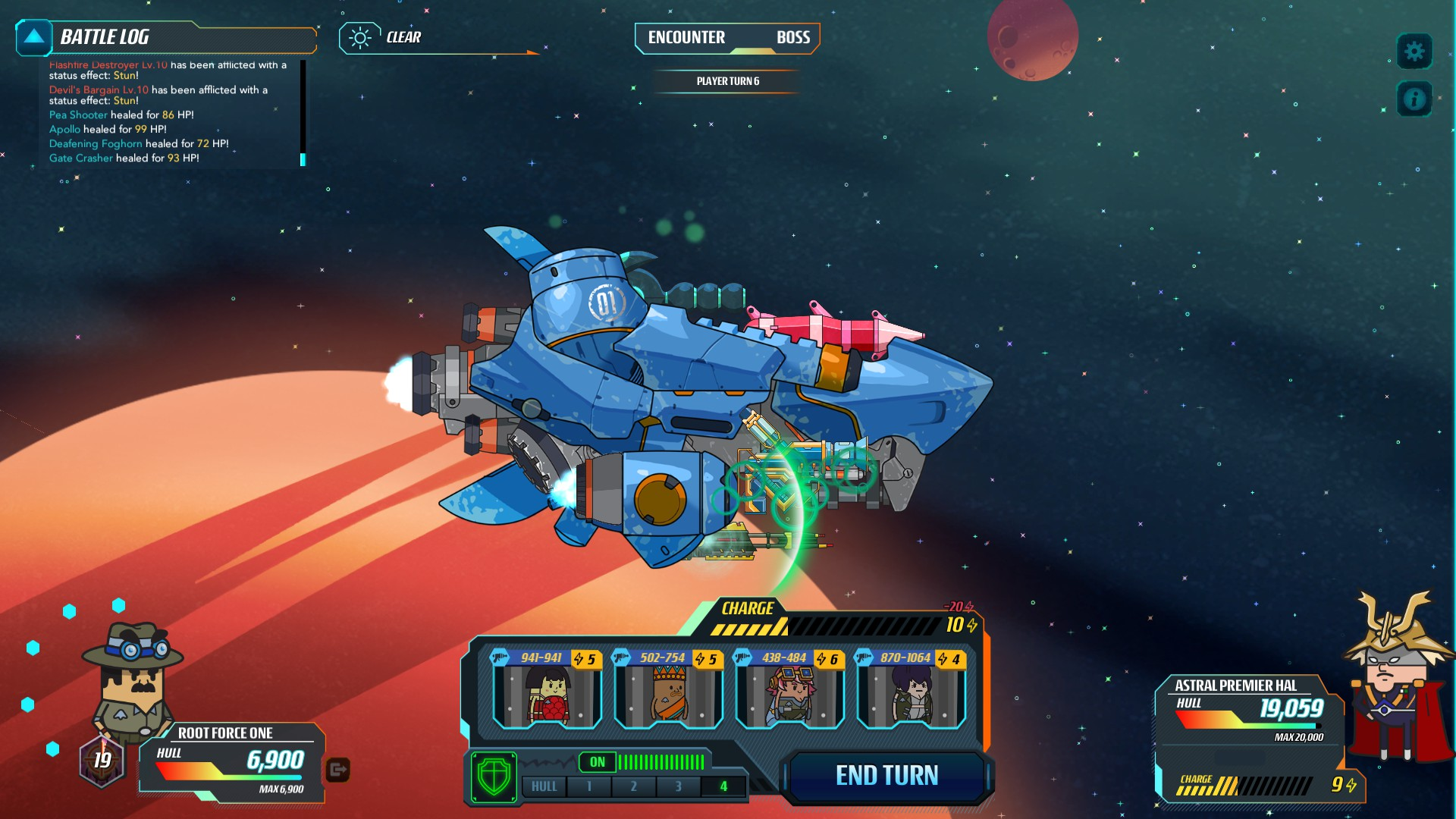 There are a lot of mechanics for you to dive into and get familiar with. Your ship has weapons, each having particular strengths and each having an amount of ‘charge’ attached to it. During your turn, you have a specific amount of charge that you’re able to use. If you’re laser takes four charge and your missile three, you need seven charge to fire both weapons on the same turn.

Along with basic weapon attacks, you earn ‘pilot skills’ throughout your playtime. These pilot skills can be used intermittently, but also sway the course of a battle in a large way. In the tutorial, your pilot skill stuns the enemy’s weapons, giving you an opportunity to destroy the weapons that have the highest threat to your survival.

There are hubs in each of the galaxies which give you the ability to add rooms to your ship, purchase upgrades, hire new crew members, purchase materials and more. You’ll spend a lot of time in the hubs before your missions to get your desired setup.

Similar to games like Monster Hunter World, the preparation before jumping off to explore a planet or into combat is vitally important. If you know that you’re heading towards a ship with five guns for example, spread weapons might be more effective and minimize your damage taken. If a ship has one or two more powerful weapons, lasers with more focused damage might be your choice instead. 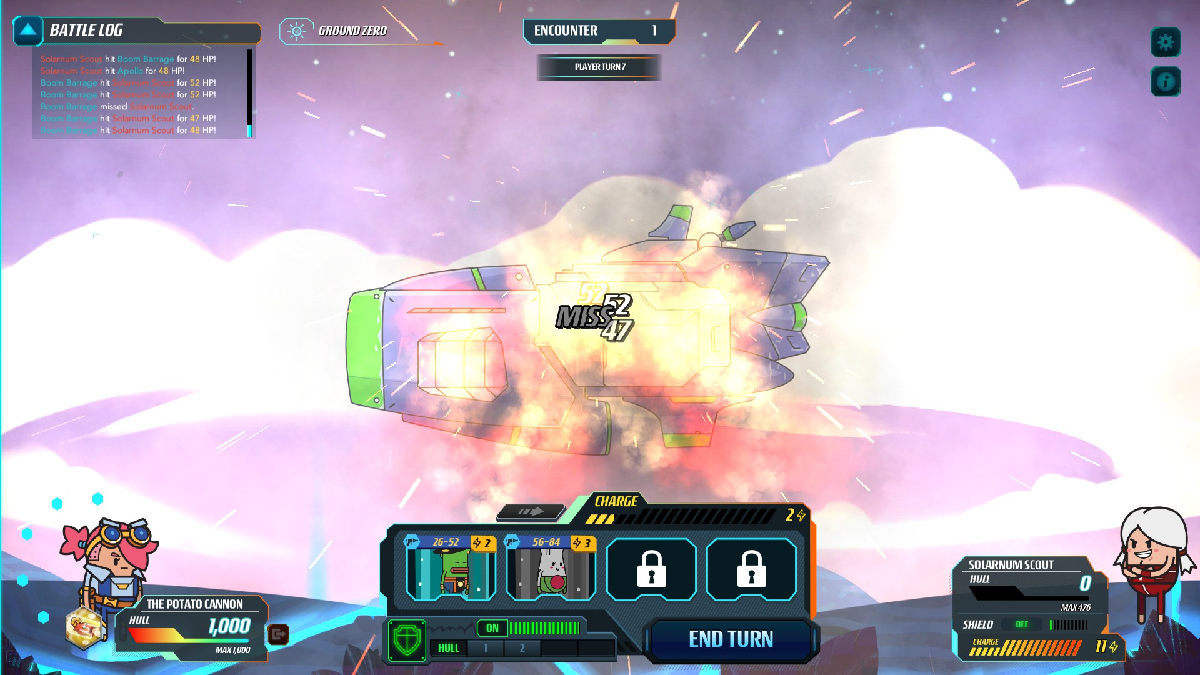 The writing is a lot of fun as well. Similar to Aviary Attorney earlier in this article, the use of potato puns are mashed into the dialogue and loaded with personality. Early in the game, you’ll also see references to other video games and pop culture in general.

This only scratches the surface of what’s offered in Holy Potatoes! If you enjoy space-based strategy games with quirky humor, give Holy Potatoes! a try. Interestingly enough, there’s a series of Holy Potatoes! games including ‘A Weapon Shop?!’ and ‘What the Hell?!’ that might be worth checking out as well.

Drawkanoid’s concept is pretty simple. When you start your game, there is a stationary ball towards the bottom of the screen. You begin playing by drawing a paddle with the mouse cursor, firing the ball off of it and to the top of the screen. Your goal is to continually draw platforms as the ball nears the bottom of the screen in order to shoot it upward and destroy obstacles. If you miss the ball, or accidentally shoot it downward, you lose a life. Run out of lives and game over. 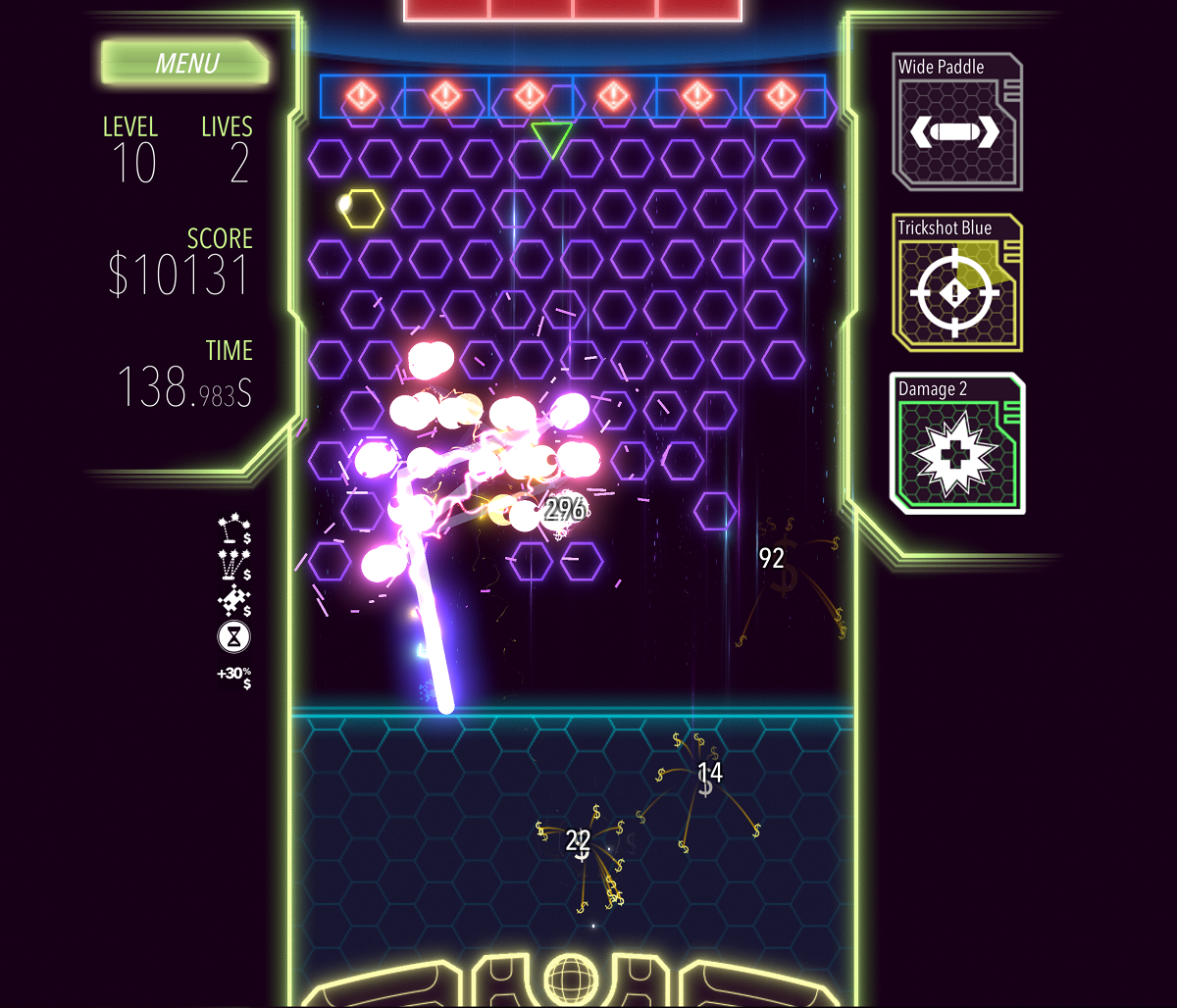 Each screen has weak point blocks that you must destroy in order to unveil the boss. Hit the boss with the ball and you move on to the next level. During your game, you earn money which can be used to upgrade different aspects of the game. You can increase the width of the paddle, earn more cash for combos, increase your damage and so on.

That’s really the game. There are no frills, not even music. Just drawing paddles and hitting balls.

Before earning any powerups, I was painfully bored with Drawkanoid. Some levels are fun and feel like you’re in the middle of the action. Others just feel like slogs (looking at you row after row of rectangle blocks). Once I started earning upgrades, it picked up pace quite a bit and started to feel fun; though even with upgrades, you hit those slog levels that feel like they won’t end. 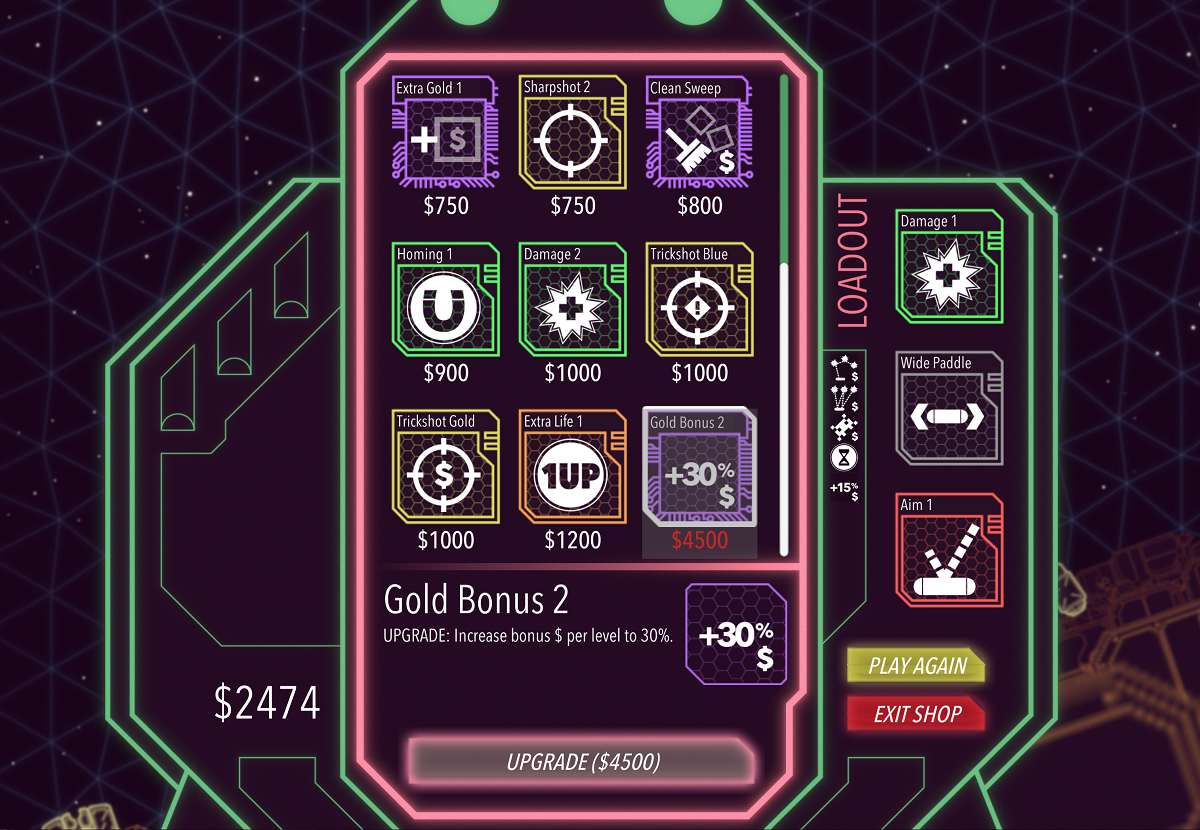 The mechanics are smooth enough, though at times I did get quite annoyed. Specifically, the starts of levels reminded me of starting a new game of Dr. Mario. There are often rows of blocks right at the bottom of the screen, causing your ball to ricochet right away. This in itself wasn’t an issue, but at times the ball would follow the path the exact same direction back downward, causing you to lose it in the mix. It’s really my fault for letting it happen so often, but didn’t enhance the experience for me.​ I can see Drawkanoid being one of those games you fire up for a few sessions then move on, but there just isn’t enough to grab me for a longer length of time.

Hope you enjoyed the Humble Monthly Roundup for March 2018. The top two games for me this month are definitely Splasher and Aviary Attorney. The gameplay in Splasher felt smooth, fun and satisfying while the humor and artwork in Aviary Attorney…..soared higher than the rest of the flock. We’ll be back in a month for April’s games, which currently includes Deus Ex: Mankind Evolved, God Eater 2 and Mafia III as early unlocks.