The Humble Monthly Roundup is my version of giving the smaller games in Humble Bundle Monthly a bit more exposure. For those who don’t know, Humble Bundle Monthly is a subscription service that provides subscribers with a set of games every month. This set of games includes a higher profile release, such as Civilization VI, or in this month’s case, Dark Souls III, with an array of lesser known games as well.

​Part I of this month’s roundup includes Overgrowth, Lost Castle and Splasher.

Overgrowth is a 3d action game developed and published by Wolfire Games that puts you in control of Turner, a human sized rabbit with ninja combat skills. Just for reference, it’s the sequel to Lugaru, a game I haven’t played. For my session, I chose to play ‘Overgrowth Story’ on Hardcore difficulty, which I came to regret for reasons later in this section.

The mechanics of the game include attacking enemies by pressing the left click button, or you have the option of channeling Solid Snake by holding Shift + Right Clicking next to enemies to choke them out and drag them out of view of other enemies. 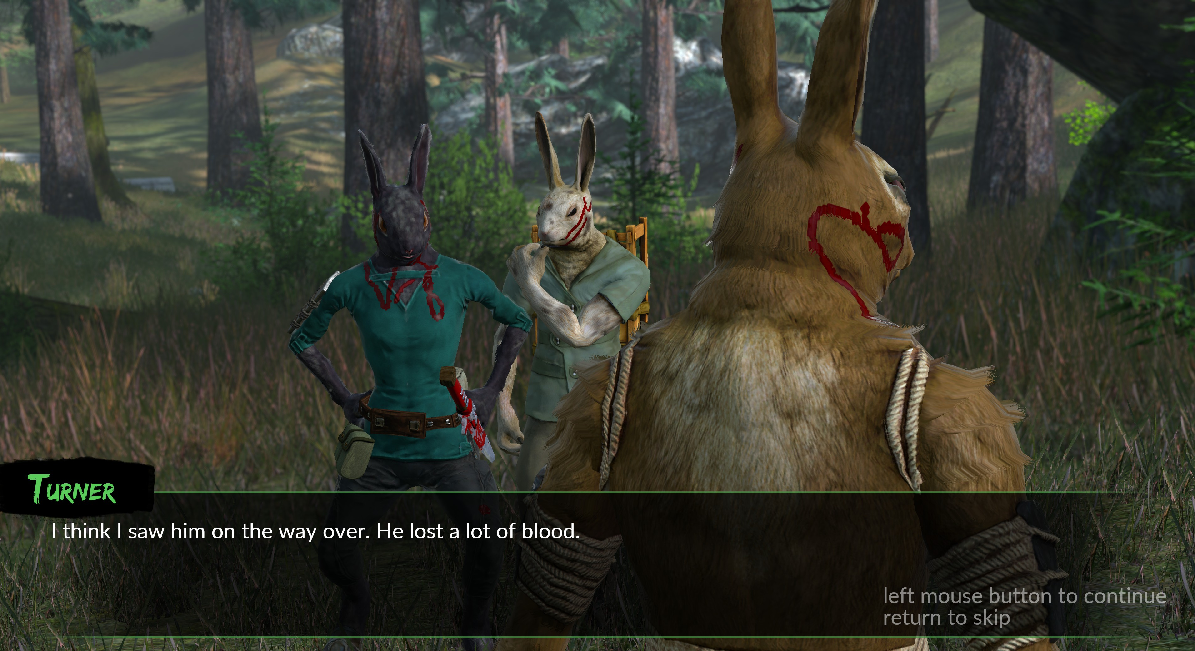 You can use these two basic mechanics to determine how you want to approach situations. You can be patient, stealthy and tactical, or brash and in your face aggressive. As you progress through the story, you start to gain weapons, like daggers, that you can wield, throw and use against your enemies.

There is also platforming, which is honestly fun considering the height of jumps that can be achieved.  You can also run across walls in predetermined sections to increase the distance of your jumps, not unlike The Prince of Persia. I only encountered two main platforming sections in my time and they were both enjoyable.

I progressed fairly easily through the first missions, up until the ‘Slate Farm’. I feel like the difficulty just ramped up exponentially from the previous missions. This mission in particular features around six enemies, one of which is a cleaver wielding white dog, which honestly doesn’t feel that odd given the description. 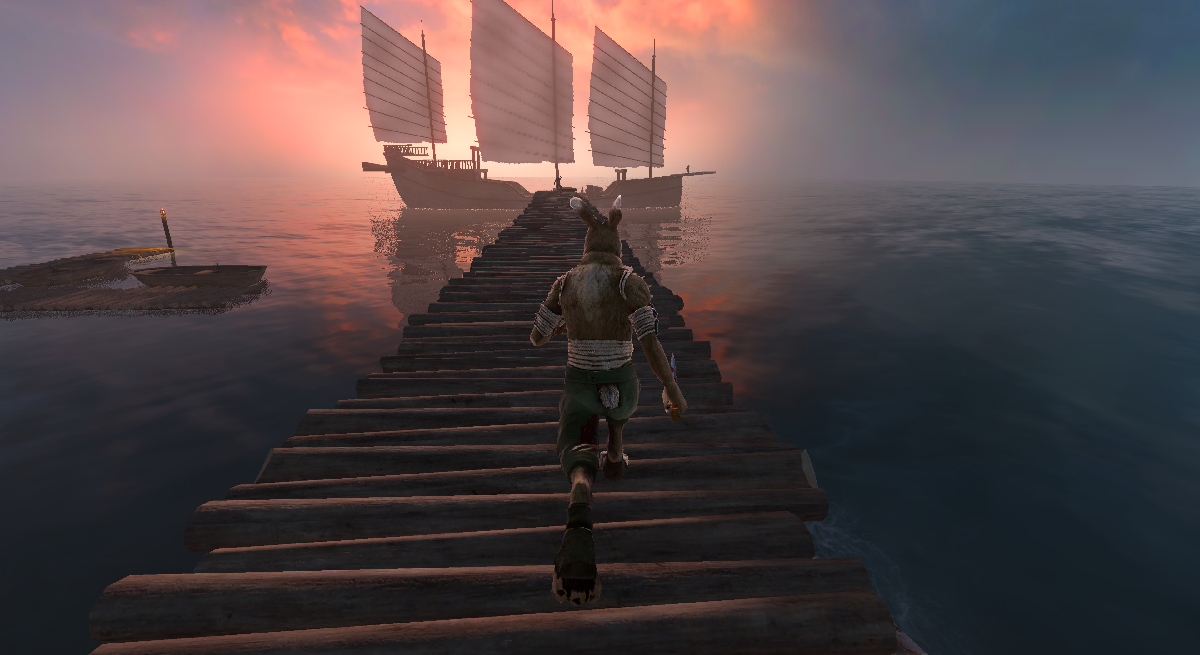 I was stuck on this mission for around 25 out of my 60 minutes, failing spectacularly on a few attempts. One attempt in particular, I manage to get cleaver dog alone. I sneak up behind him, expecting to choke him out and finally finish this mission. It doesn’t work, but I’ve disarmed him! I’m now cleaver rabbit. White dog punches me, I lose the cleaver. White dog picks said cleaver back up. I stand at the ready, filled with resolve, awaiting his next move. He throws the cleaver at my face. I die.

So I changed the difficulty to casual, and beat the mission first try.

The next missions went rather smoothly, which led into the second area of the game, snowy ice cliffs. After a platforming section, my last bit of time got wiped out by a wolf that made me his business for about 15 attempts. 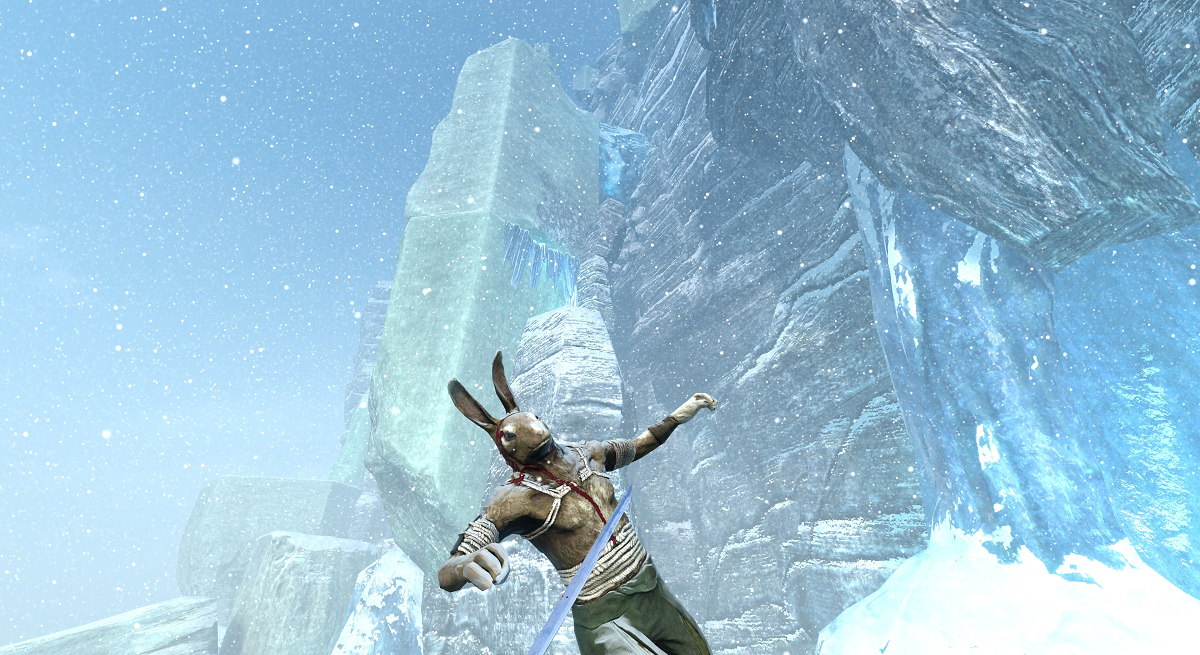 Overgrowth is focused on creating fun combat, but at times it feels clunky. For myself, I felt like I was missing something, like a key game mechanic that would have made things click a bit faster. I’m not sure, but I do know that the first hour of this game wasn’t that fun. I really enjoy the platforming and character models, but I’m not sure the rest is for me. I’ve also heard there are great multiplayer mods for Overgrowth, which might be worth checking out in the future.

Will I Keep Playing? I feel like I want to return to check out mods, but I know me. I will likely move on to other things and forget about Overgrowth.

Lost Castle starts off with a wizard opening an ominous portal, accidentally sending forth creatures from Hell. Legends and myths of treasure in this castle starts to fill the ears of adventurers around the world, causing you, our playable character, to venture towards looting the castles spoils. On the way, you get caught by goblins and must break out of their prison before continuing onward. 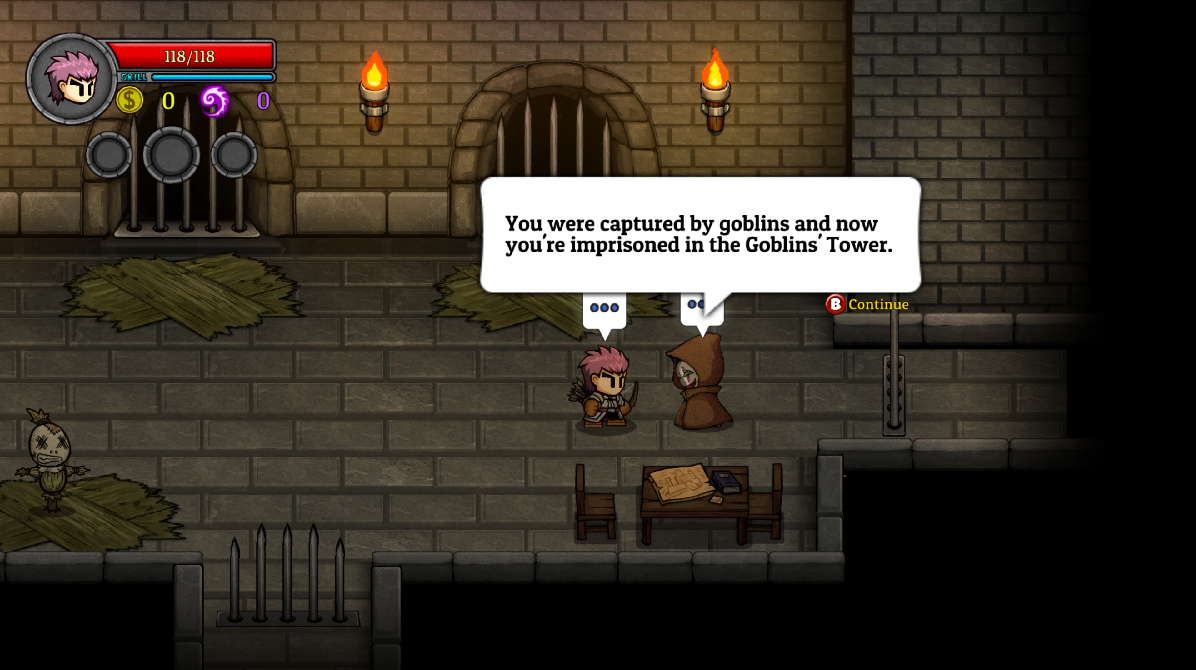 Lost Castle has a good initial feel. Your character begins as an archer with a few different levels of attack. You have a light arrow attack that turns into a three arrow spread after three concurrent attacks, you have a heavy attack that pierces through enemies with the added side effect of kicking you backward, and you have a skill attack which unleashes a flurry of arrows whenever the meter fills up.

Because this is a side scroller, you have to be precise with your attacks on enemies on screen. If they don’t line up horizontally with an attack, you’ll miss. Part of going through the Goblin Prison includes acclimating yourself with these different attacks and trying to position yourself correctly depending on what enemies are on screen. Each new screen of enemies feels a bit like a puzzle that you have to solve in order to move forward. 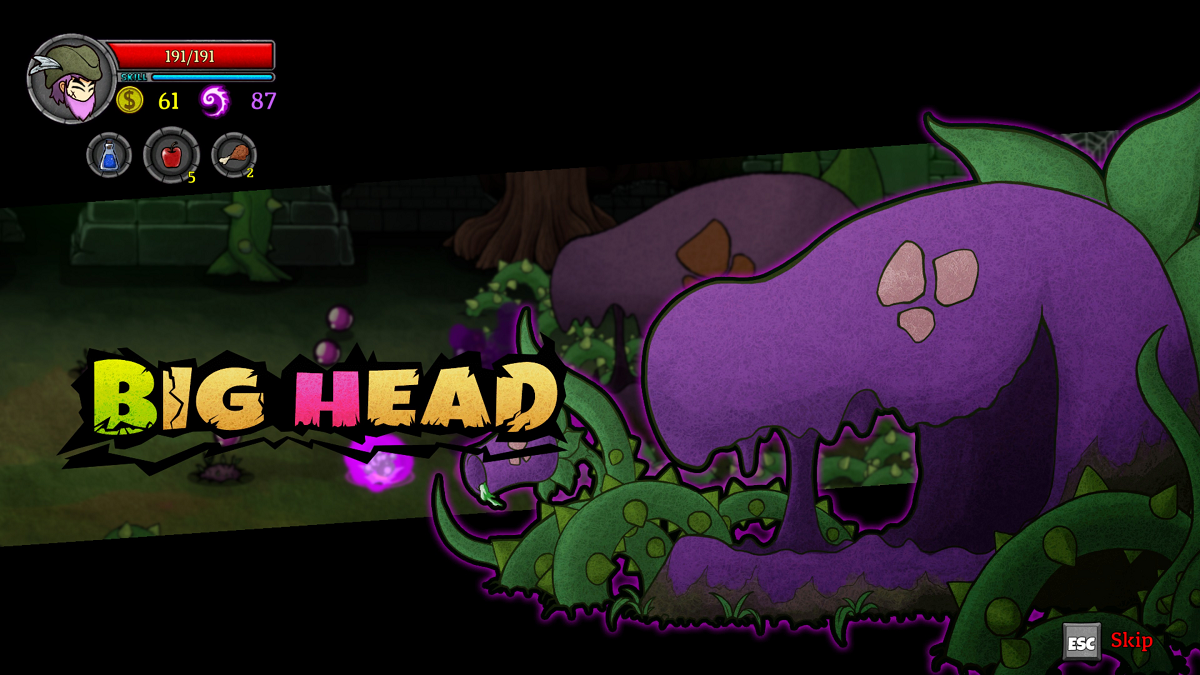 I ran into three different bosses throughout the hour I had, and they were all fun and challenging in different ways. The Goblin King for example, rides this giant ram/catapult hybrid and pushes you from the right of the screen to the left, forcing you to maneuver around barrels, spikes and enemies as the screen scrolls.

Once you die, and you will, you can use the souls you have received as currency to improve your characters for the next go around. You can unlock various abilities using a skill tree that’s provided. In the beginning sections of the tree, you can get more health, defense, speed, better items and more.

I went through with a  few different weapon types, but came away with the feeling that ranged weapons were superior in a lot of ways. Even for the few boss fights I encountered, it was infinitely easier to sit back, fire off a few rounds or arrows, and keep moving. I’m sure this may change will more time into the game, but going from archer to lancer was night and day.

All things considered, Lost Castle is fun and seems like a mini version of Rogue Legacy, and that’s something I can get behind.

Will I Keep Playing? Yes.

Spalsher feels like a combination of Splatoon, Super Meatboy and Donkey Kong Country. To start, you wield a paint cannon and navigate through different environmental hazards and enemies. Within each level, ink guns will shoot various color ink onto floors, walls and platforms, requiring you to choose how best to progress forward. You die in one hit, but checkpoints make that less painful and there are even minigames in the vein of Donkey Kong bonus barrels scattered throughout each level with their own mini challenge contained within. 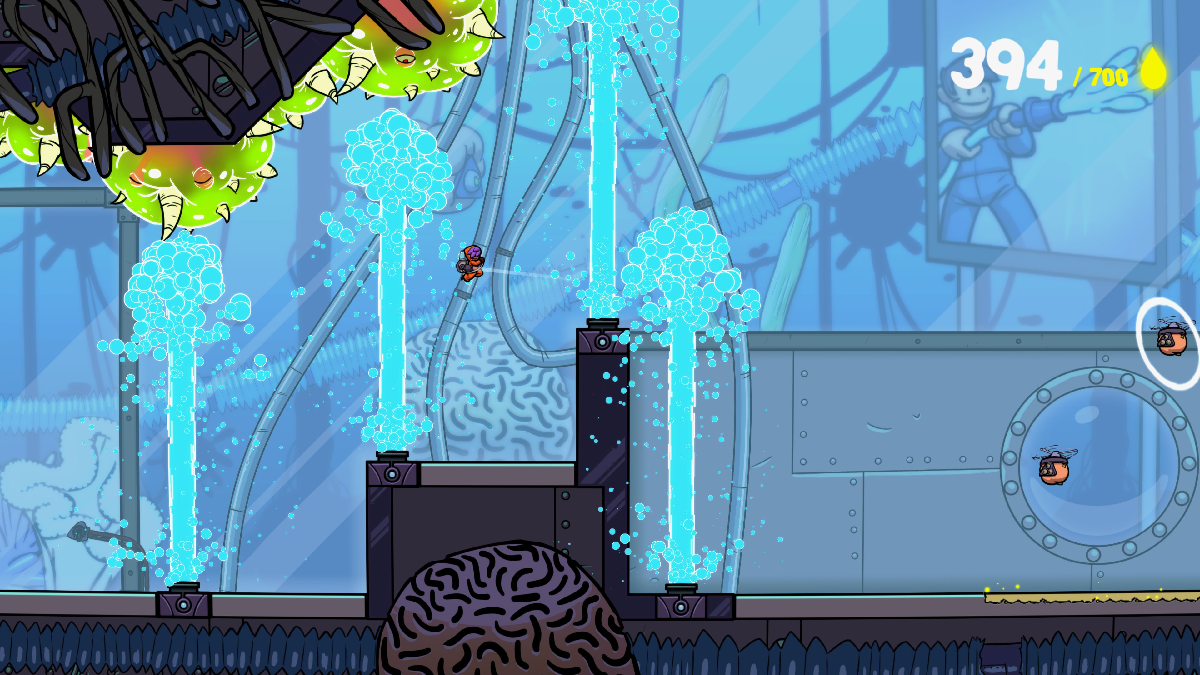 In the first hour, I encountered red paint, which can bog you down if walked on, but also allows you to climb up walls, and propel across ceilings if covered. There is also yellow paint which causes you to bounce off at longer or higher distances than a regular jump. Lastly, water cannons, which will clear paint off of surfaces, as well as driving you in the direction they are facing.

Splasher does a great job of introducing new elements to you in small, digestible pieces. The beginning level ends with you receiving your own water cannon, which can kill enemies as well as trigger propeller platforms or obstacles. Once you get the cannon, it’s on.

Some of the stages are themed around one mechanic. For example, one houses walls full of yellow paint, bouncing you everywhere. Another focuses on water jets throughout. The most fun and chaotic though, are the levels with everything combined.

Splasher is also a speedrun friendly game. After completing the first level, you unlock a ‘speedrun’ version of each level; something I hope more developers recognize in future years. 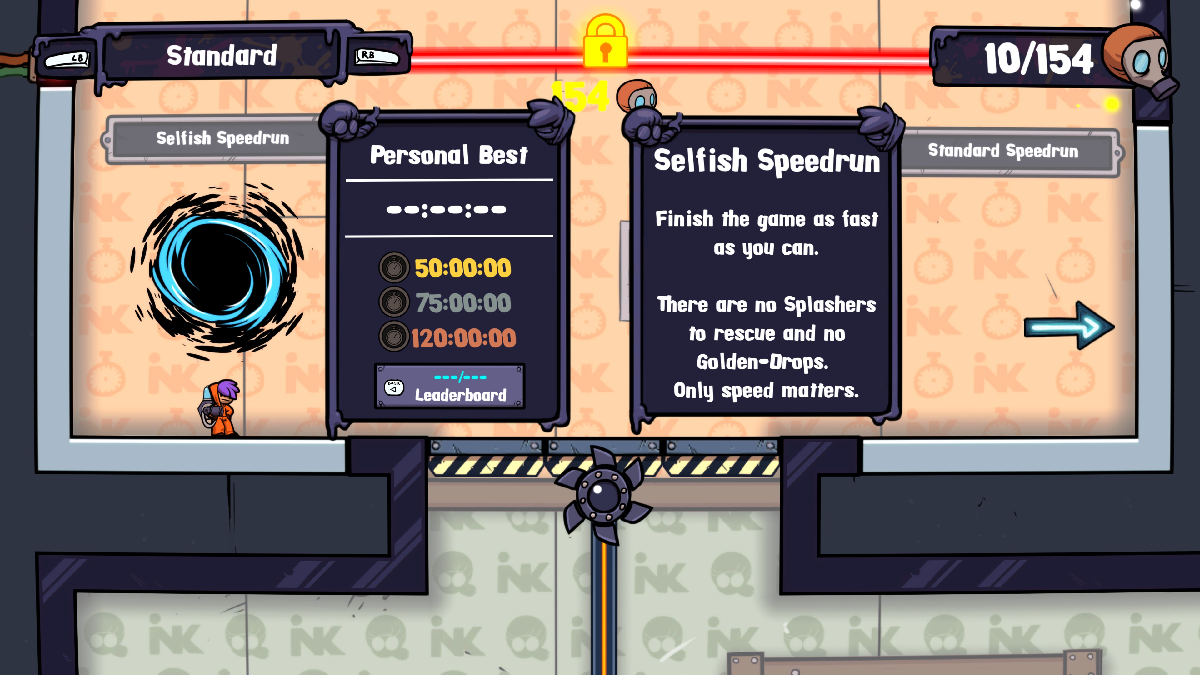 This is the first of the bundle games thus far as well that has made me really notice the music. You get sucked in, and creates an atmosphere that sucks you in as you fly through each level.

After only an hour of Spasher, I can tell there’s a lot of replayability and complexity here. Each level houses individuals that you can free, which in turn helps unlock certain areas of the hub world. There are also speedrun challenges like I mentioned previously, as well as time trials for each level. I feel like I’ve only scratched the surface with Splasher, and that’s really exciting.

Will I Keep Playing?  I definitely want to finish Splasher. It’s fast paced, challenging, but forgiving, has great music and I really just need to know what they will throw at me next.

Check out more here: I Wasn’t Prepared For This