Dragon Sinker: Descendants of Legend, is a new NES-style RPG made by Exe Create Inc. and published by KEMCO. I was originally drawn to Dragon Sinker after seeing the graphic style and wanted to get my hands on another turn-based RPG.

If you’re familiar with RPGs, it’s the standard fare. Hunt down evil dragon, team up with elves and dwarves, go through different class options, find items in jars, the usual; but familiarity is not necessarily a bad thing. While you may have played through a version of the story in previous games over the years, Dragon Sinker excels at giving you that old school feel while giving you a modern flair as well.

The story kicks off telling the player of Wyrmvarg, an evil dragon that suddenly appears to wreak havoc on the world. A human, dwarf and elf get together and seal away Wyrmvarg deep within the Earth. Unfortunately, Wyrmvarg breaks free one hundred years later; thus kicking off your quest to rid the world of Wyrmvarg once and for all. 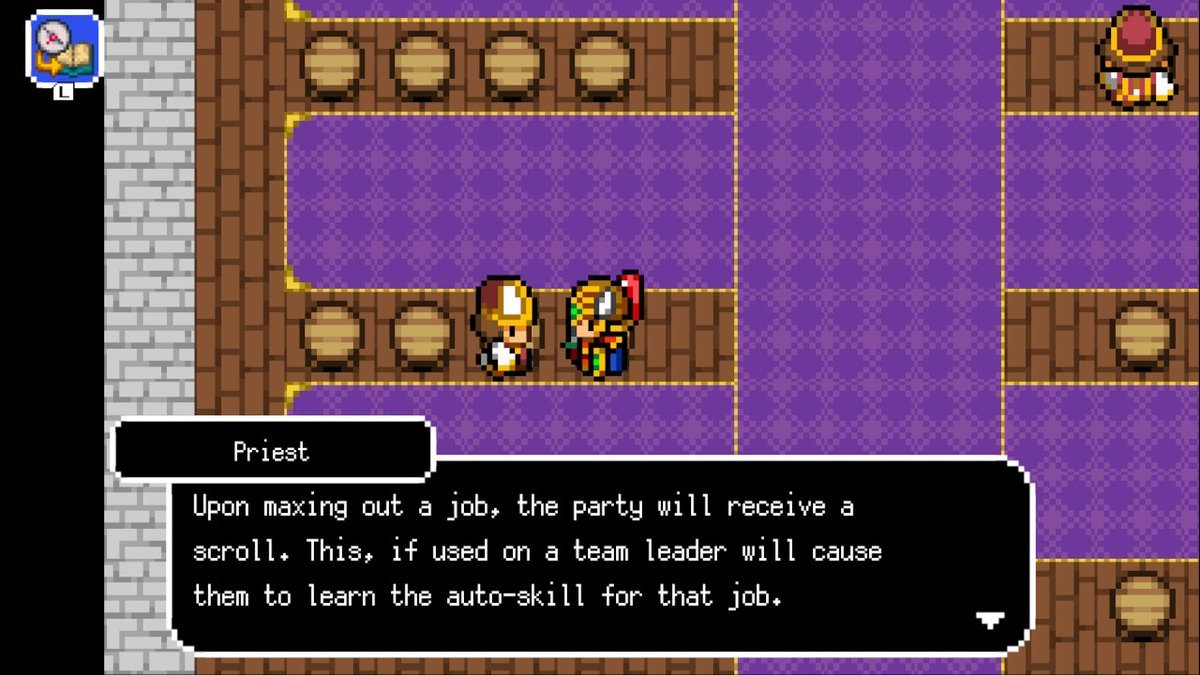 Information regarding the job system and incentive towards maxing out jobs for characters.

To accomplish your goal, the game presents various mechanics for you to utilize which is largely explained through the game’s opening town NPCs. Some of those things include;

Since I’m playing on the Nintendo Switch, it’s worth mentioning that the game feels substantially better as a handheld as opposed to playing on your television. The character sprites in particular on the world map are zoomed in quite a bit. It feels a bit off and jarring. After my initial session on my television, I played through the rest of the game as handheld, which seemed to fit the game much better.

The Lottery System and Store

In game, there is an option to play the lottery. Using this lottery system, you’re able to get items at random in two different ways. The first way is by purchasing items with gold at shops, which sometimes nets you a lottery voucher. The second, by killing enemies and receiving DRP, or Dragon Points, after battles and spending 100 points to roll for a prize.

When I first saw this, I thought it was great. It’s another way to reward the player for just going through the game. Not only can you receive experience and job points for killing enemies, but now you can receive Dragon Points and work towards getting more items and equipment over time. 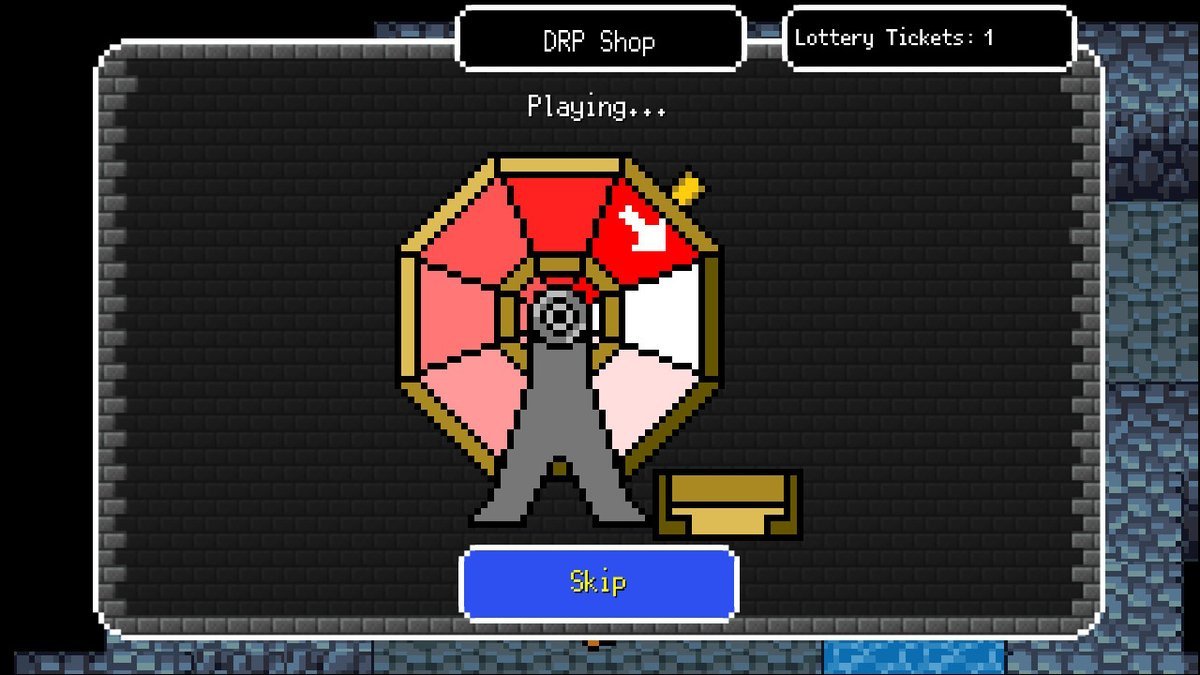 Example of the lottery system rolling to determine which rewards to give you.

This was short lived for my play through. You start the game with 1000 DRP and 10 lottery vouchers, giving you 20 free rolls at items and equipment before you start your quest. The prizes are split into four tiers, each holding a different percentage chance to acquire. You could have a 4% chance of getting a 1st tier prize, which can include new party members, and a 40% chance of a tier four prize, netting you things like ethers or mid-heals.

My first DRP roll landed me a 1st tier prize, a new party member that was ridiculously strong in comparison to my other party members at this point in the game. My party leader had 96 HP while this new member had 518 HP. 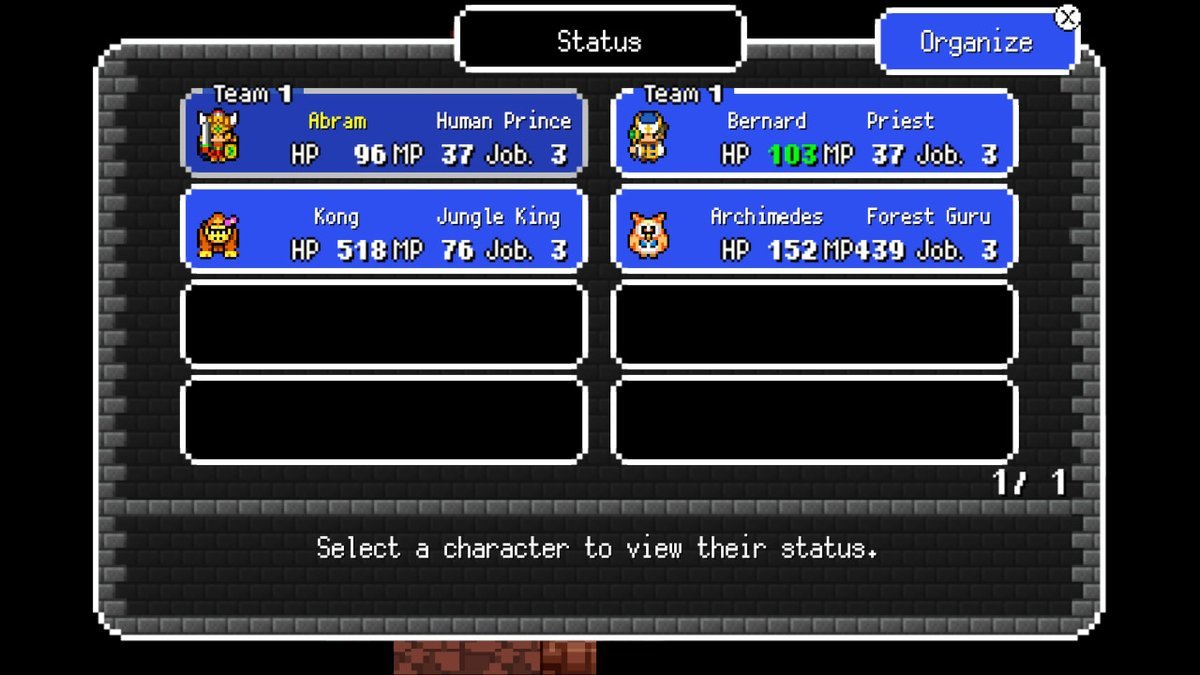 Two characters, Kong and Archimedes, obtained by lottery at the start of the game.

I went back and forth with myself for a little while about whether or not I should use him. The argument was that I used the presented game mechanics to obtain him, but it would really make the early game feel effortless.

I ended my internal debate with a sentiment that I express further below in this review. That sentiment is that Dragon Sinker gives you a lot of options in the way you choose to play the game. The player will largely have a different gaming experience based on those choices, but it is their decision none the less.

I opted out of utilizing this early game powerhouse because it wouldn’t have made the game more fun for me to play through. More importantly, I wanted to get an accurate feeling of the difficulty and balance that the developers were aiming towards.

There is also a store available to purchase job scrolls, equipment and stat enhancements, for those who love to min/max their characters.

Dragon Sinker goes out of its way to improve a lot of quality of life issues that had plagued RPGs from those early generations. For example, if you press the ‘R’ button, you have the option to instantly cast a healing spell to heal your party. You also have the option to press the ‘+’ button and save anytime. The following is a list of other quality of life changes worth mentioning; 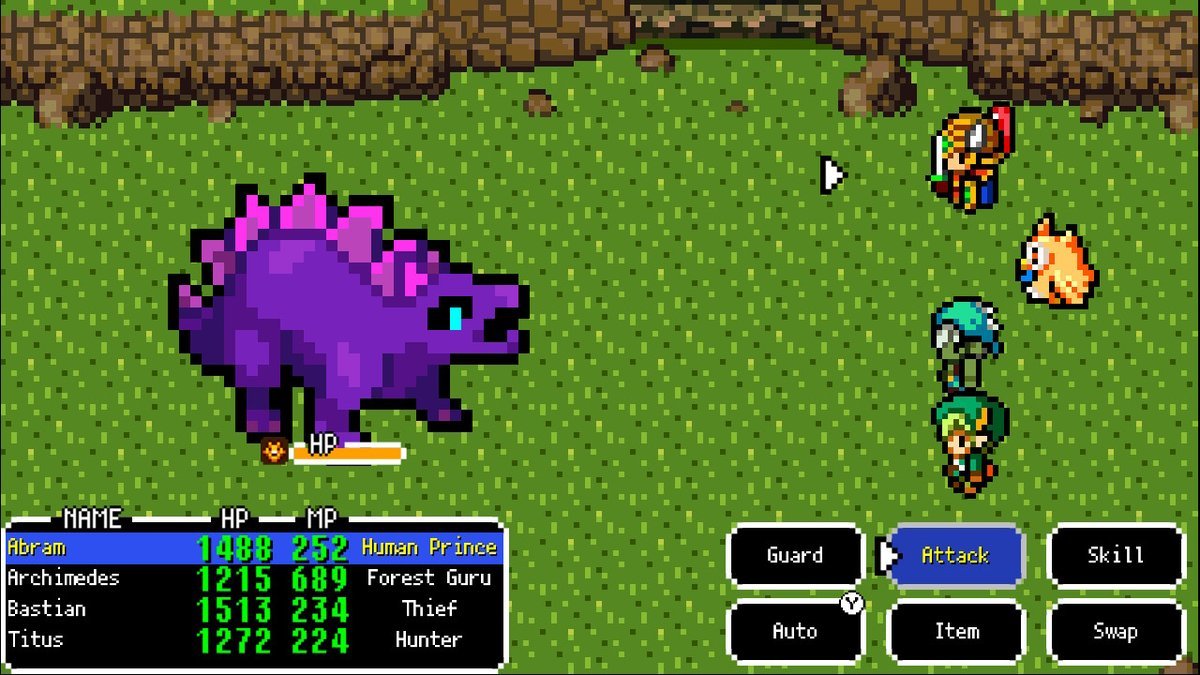 The battle setup will seem familiar to RPG veterans. 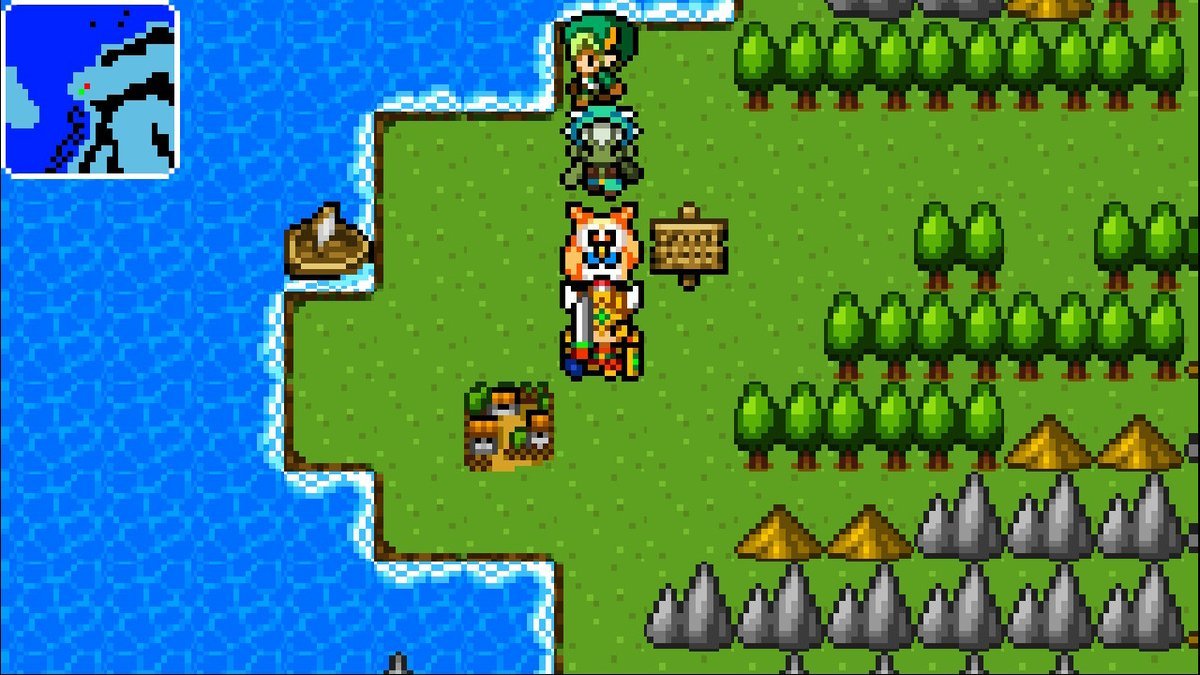 Example of how the world map looks as well as the in-game mini map. 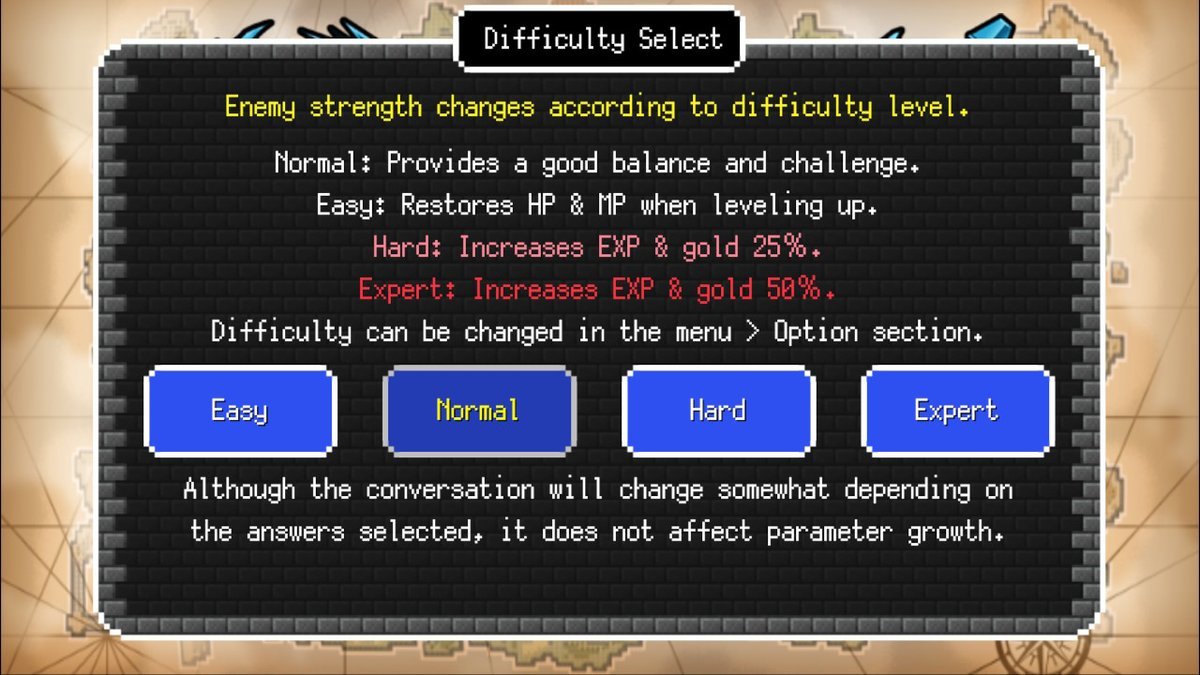 You have the ability to switch difficulties in game, with the higher levels offering rewards.

One aspect I was excited to discover in Dragon Sinker was side quests. On occasion, you could be traveling around a town and there will be NPC’s with symbols over their head, indicating that you should speak with them. These NPC’s will often give you a side quest such as “Hey, go here and kill X monster.” or even fetch quests such as finding flowers for a grave. 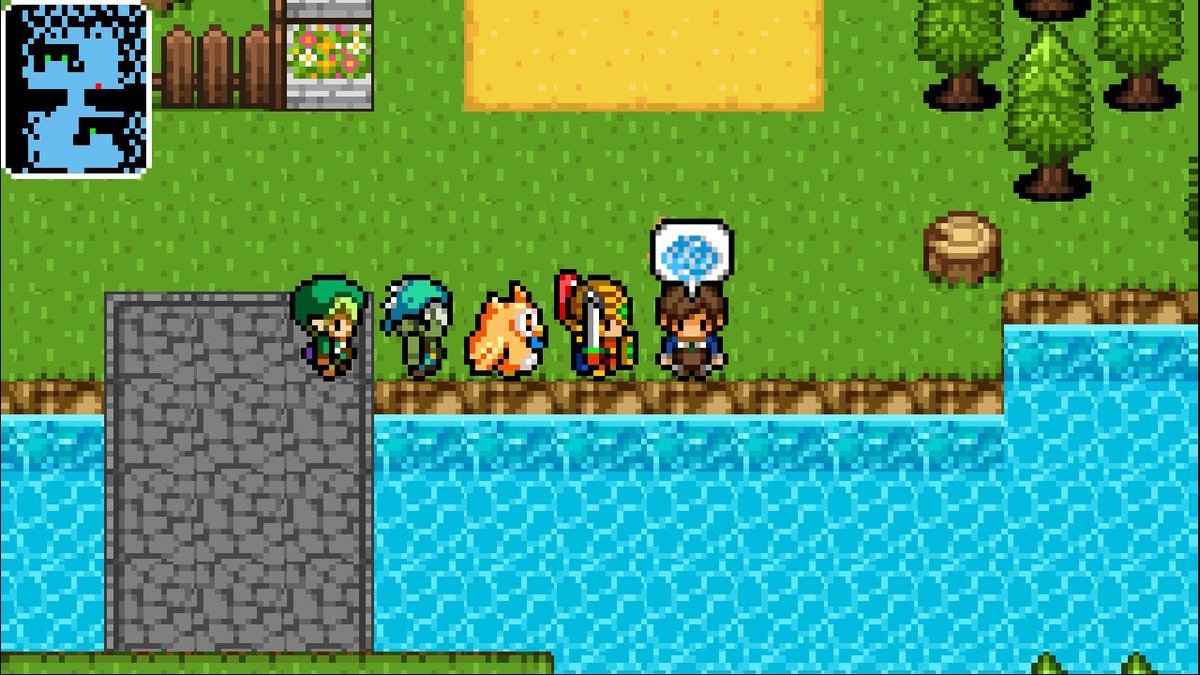 Example of a NPC with a side quest available.

What I ended up realizing the further I got into the game, was that side quests nearly always required you to go back to the previous area you just came from. For example, in the beginning of the game, you are sent to a cave in the South to acquire an item. Afterward, you head to the second town to the East. In that second town, you get two side quests, both of which send you back to the Southern cave you just came from.

The unfortunate part of this is that some of these side quests unlock new jobs and characters to join one of your three teams. You start to feel as if you have to complete certain side quests to take full advantage of the mechanics the game is offering to you.

I do enjoy the idea of side quests unlocking new jobs, but the way it was implemented feels more like the developers chose game padding over adding more fun to the experience.

Although most dungeons are uninspired at best and don’t offer multiple pathways through, there is a quest to obtain five stone tablets that have a bit more fun with dungeon design. For example, one deals with water currents and another requires you to kill specific monsters and push stones they leave behind to progress forward. It’s nothing extremely detailed or complex, but it was a welcomed break from the typical dungeons that the game offered. 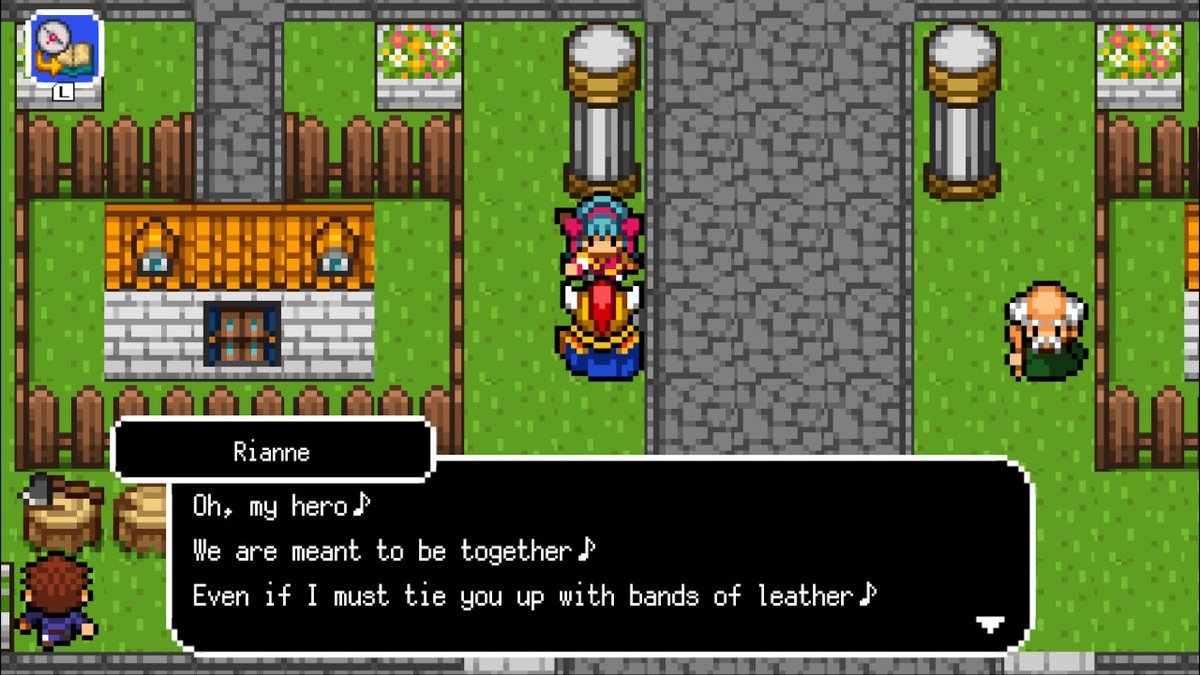 Dragon Sinker has some funny bits of dialogue scattered throughout, but ultimately, it’s not enough to create compelling characters.

Dragon Sinker is an old school RPG in a lot of ways. If you’re familiar with games like the original Final Fantasy and Dragon Warrior, you’ll see similarities in story, tone, music and battle system. You won’t find a sprawling, complex story or characters with much depth, but you will find a largely satisfying gaming experience that can be customized and tailored to what the player would like his or her experience to be.

I believe that Dragon Sinker accomplishes what it was set out to do, provide a competent turn based RPG that tugs at your nostalgia strings as you charge through the pixelated landscape.

You can find Dragon Sinker on the Nintendo Switch Shop here​.

You can also check out the official site for the Nintendo Switch release here.